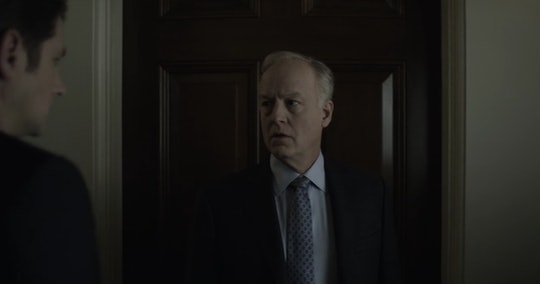 Who Is Donald Blythe On 'House Of Cards'? Frank's Vice President Gets A Promotion

The Underwoods have a talent for complicated relationships. The House of Cards power couple is known for being... let's just say cautious about who gets into their inner circle. First, Doug Stamper. Now, Leann Harvey. A few others who have come and gone. But what about the Frank's Vice President Donald Blythe on House of Cards? Not only is Donald Blythe not in the inner circle, but does anyone even know who he is?

Back in Season 1, Donald Blythe was a lefter-than-left Democrat who served mostly as a stepping stone for Underwood's revenge plot against newly elected President Walker. Blythe was working on an education bill that Underwood leaked to the press, which was considered too left of center, leading to Blythe being criticized by the media. Underwood could have probably destroyed Blythe at the time, but Blythe was a well-liked, if slightly passive, Congressman, and Underwood knew he might need him for the long game.

Which he did, of course. When Underwood maneuvered his way into the Vice President position under President Walker in Season 2, he came back into contact with Blythe. This time around, however, Blythe wasn't quite as easy to win over. He called Frank "fundamentally deceptive" and refused to vote for Frank's entitlements bill. The two politicians eventually meet in a sort of truce, though, when they are stuck quarantined together during an Anthrax scare. It's then that they pave the way for Donald Blythe to become Vice President in Season 3.

After being appointed as Vice President, Blythe began to play a very distinct role in the Underwood administration — the non-role. In a way, he's the ying to Frank's ruthless yang. But when Frank is sent to the hospital for the shooting at the rally, Blythe is pushed into the spotlight as Acting President. Blythe — the same Blythe you probably forgot about after every episode.

So, how does he do in power? In Season 4, Episode 4, when he needs to make some clear decisions about the issue with Russia and dissident Milkin, he waffles. He needs time to think — it's all too much.

Until Claire comes to the rescue. Claire seems born to arm men without armor, to bolster them when times are tough — she did it with Frank, and she will do the same with Blythe. In that very special way she manages to get what she wants, Claire convinces Blythe to overturn Frank's plan with Milkin, which in turn infuriates Doug Stamper. A similar thing happens when Blythe sits down to talk to domineering Petrov about the oil crisis, it's Claire doing the talking, the supporting, the deciding. When Blythe starts to equivocate, Claire is the one who turns things around. While Blythe had his run in power with Frank in the hospital, he just proved that he is not President material. He's no Frank Underwood, and he's definitely no Claire Underwood.