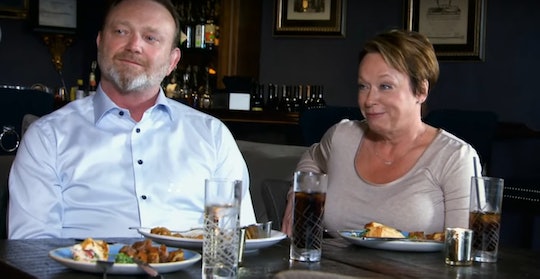 I have been watching Married At First Sight for eight and a half seasons and I barely remember the faces of the couples' in-laws, let alone their names. That changed Season 9 after the newlyweds had one-on-one meetings with their in-laws for the first time on the series. Suddenly I had to know who Elizabeth's dad is on Married At First Sight. He's so intense I feel bad for Jamie because his father-in-law is not shy about interfering in his daughter's marriage. Yikes. So many red flags.

Ronnie Bice introduced himself to his new son-in-law at the wedding by passing on her car registration paperwork with a gift card to fund the fees. That's a very intimidating first impression, but there is no denying that Ronnie takes care of his daughter. Elizabeth is an account executive at Ronnie's company.

He is President and CEO of Telesource, a telecommunications company. According to the company website, "we deliver complete Telecommunications products and services to keep organizations running smooth, so that businesses can focus on growth."

Ronnie seems very dedicated to his job. I mean just look at his Twitter account, which is just full of retweets from the Telesource account. I was kind of expecting to see more commentary on his daughter's TV appearance, but it's probably a good thing he's staying quiet. A Twitter search on him reveals that majority of fans need Ronnie to relax.

I didn't think it was possible, but Ronnie came on even stronger with Jamie at an in-law brunch. "If you can't tell already, I take care of her. I couldn't watch you kiss her last night. I'm very protective of my daughter. So that whole lips on her face thing really got me upset," he said.

But he went even further than that. "When the garter came off, I had to turn away; I couldn't watch it. That's still my little girl and it still makes me a little sad because I know you're going to take a part of her life I've always had." It must be extremely difficult to watch your daughter get married to a stranger, but that was Elizabeth's choice and Ronnie supported it. There is going to be kissing in a marriage and it takes two people. Why is he coming so hard at Jamie when his daughter is a full-grown adult?

On an episode of Married At First Sight: Unfiltered where cast members reflect on episodes that have aired Jamie admitted, "It could definitely present issues because if Ronnie is that into her life and that protective of her, it could be a big deal." He continued, "At this point, I don't know what to think because it seems like he's really attached and he's having a hard time letting her go."

That's putting it lightly if you ask me. It's still early in the marriages, so there is plenty of time for Ronnie's meddling to get even worse. Only time will tell if a dad will literally come in between a Married At First Sight couple.