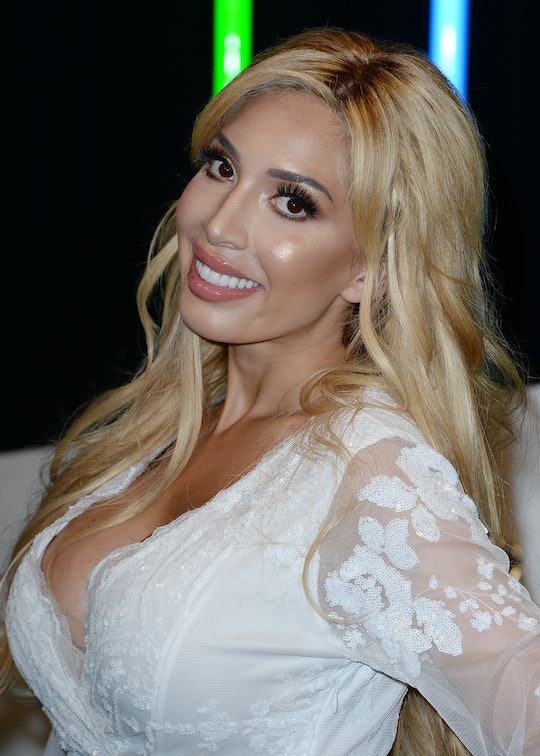 Everything You Need To Know About Farrah Abraham's New Boyfriend

Fans of the MTV reality series Teen Mom OG are well acquainted with Farrah Abraham, arguably the most controversial mom on the show. Ever since she initially came to national attention in 2009 with the MTV docu-series 16 & Pregnant, Abraham has managed to stay a regular fixture in the gossip headlines. Sometimes for good reasons, but mostly the attention has often been unfairly negative. With any luck the latest headlines will turn out to be the former. It turns out Farrah Abraham is dating a new man, and she is looking pretty happy about it.

Us Weekly reported on Thursday that Abraham, who is the mother to 9-year-old daughter Sophia, started dating 40-year-old stuntman Aden Stay. The reality star and author had an on-again, off-again relationship with San Diego-based house flipper Simon Saran, but the couple broke up for good in April 2017, as the Daily Mail reported. Since then, Abraham told Radar Online that she signed up for the popular dating app Bumble, where she wrote in her profile that she was "looking to connect with smart, intelligent, creative, and open-minded people." She also told the media outlet that she didn't join Bumble to date, but was more interested in business networking because she just has "no time to date right now."

After being spotted out for lunch on Wednesday in Los Angeles, Abraham gushed to Us Weekly about Stay:

Aden is amazing. I’m a lucky woman and feel blessed. We have just started our relationship and I feel like I met someone who is amazing.

According to IMBD, the father of two daughters (both from a previous relationship) is a busy stunt actor who is working on several movies at the moment including Jurassic World: Fallen Kingdom, Legal Action, The Gifted, The Boundaries and Den of Thieves. In the past he also worked on Pitch Perfect 3, where he met his last girlfriend before dating Abraham, actress and comedian Rebel Wilson, as reported by Heavy. Beyond his work in the film industry, Stay also has a number of business ventures including a construction business and the co-ownership of a Mexican restaurant Lui Bueno's in his native state of Hawaii, according to Heavy. All of these qualities add up to something intoxicating for Abraham, who also told Us Weekly:

I love that he’s Hawaiian, an amazing father, business entrepreneur and we have many similarities. I can’t say enough great things about him. I’m a lucky woman.

The single mom seems as though she could use a little luck in her life these days. The makers of Teen Mom OG reportedly recently severed ties with Abraham after she allegedly fought with one of the producers of the show. She was also allegedly asked to give up her work in the adult entertainment industry but refused, according to reports from People and Radar Online. Abraham is now suing the show for $5 million for breach of contract, and will not be returning for the upcoming Teen Mom OG reunion special, according to The Blast.

Fortunately, she seems to have found some happiness with Stay. Looking back at a 2017 interview with Us Weekly, Abraham knew what sort of man she wanted even then; and Stay appears to fit the bill. She told the media outlet:

I just think I deserve somebody who is … like myself and maybe that’s an entrepreneur or whatever. That’s all I’m really looking for — no drama, honest and has some integrity, and I think that’s great.

On paper, the two seem to have loads in common. They're both single parents, both work in the entertainment industry, and are both hard-working entrepreneurs. With any luck, the young mom will find some serious joy with Stay.