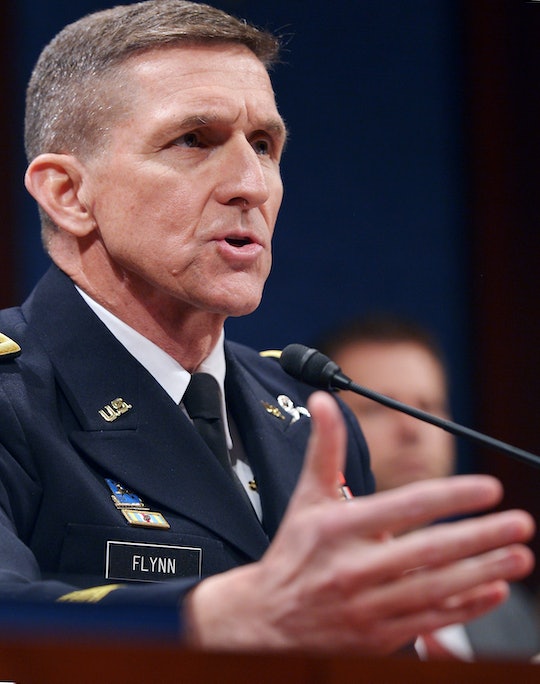 Who Is Gen. Michael Flynn? He Was Named Trump's National Security Adviser

As President-elect Donald Trump continues to assemble his transition team to help him with the daunting task of becoming Commander in Chief in 2017, certain trends are making themselves clear. Loyalty is vital. A bit of a hot temper acceptable. And experience is not always required. Luckily in the case of Lt. Gen. Michael Flynn, who a senior Trump official says has been tapped to become his national security adviser, experience is clearly not an issue.

Trump raised some serious eyebrows earlier in the week with his appointment of Steve Bannon, former CEO of Breitbart News, as his chief strategist in the White House. Bannon has no experience in holding a government office and has a history of courting controversy with his alt-right news site, Breitbart News. Trump's choice of retired army Lt. Gen. Flynn as national security adviser, on the other hand, hasn't come as much of a surprise; after all, Flynn has already been acting as a key adviser to president-elect Trump.

Flynn is the former head of the Defense Intelligence Agency and a seasoned combat veteran with several tours of duty under his belt. While Flynn will be bringing some much needed experience to Trump's White House staff if he accepts the appointment, he will allegedly be bringing along yet another hot temper; Flynn has a reputation for getting fired up, not unlike the new president-elect himself.

As National Security Adviser, Flynn's appointment would not need to be approved by the Senate. He would have direct access to the president, and would be in a position of global power; It is considered the job of the national security adviser to keep the president abreast of world issues. Peter Bergen, CNN's national security analyst, felt Flynn made sense for the post:

What makes Gen. Flynn different from so many others that we've heard about on Donald Trump's transition team is he is the one with the real experience fighting on the ground in Afghanistan and Iraq. Certainly, he would be a very plausible candidate for national security adviser, which is arguably the most important national security position in the government.

While Flynn and Trump appear to be on the same page for a number of issues (both men have openly criticized United States intervention in Libya, for example), there is one vital area where they could differ — Syria. Trump has said that he would not support a no-fly zone over Syria, but in a June radio interview Flynn said, "We should create, you know, safety zones, flight zones, whatever, both ground and air."

One thing Trump and Flynn seem to have in common: an ambiguous "will they/won't they?" relationship with Russian President Vladimir Putin. Trump has repeatedly waxed poetic about Putin's strong leadership while Flynn sat at Putin's table at the 10th anniversary dinner for RT, a propaganda news outlet for the Kremlin. Flynn was reportedly paid to give a speech at the dinner as well, though observers said he was "tough" on the Russian president.

No word yet on whether or not Flynn plans to accept Trump's offer.