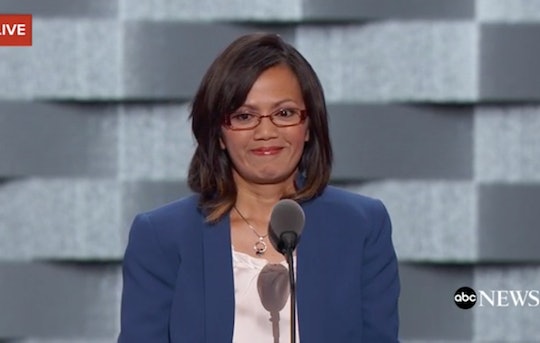 Who Is Ima Matul? The DNC Speaker Is One Courageous Woman

She has lived a life of hardship that is nearly unimaginable to the majority of us. And yet there she stands, unbent and unbroken, in front of millions of Americans. If you are wondering who Ima Matul is, one of the inspiring women who spoke at the Democratic National convention on Tuesday, know this: She has courage in spades.

Ima Matul was born in a Gondanglegi village in Malang, East Java. When she was just 17-years-old in 1997, she was lured to Los Angeles with the offer of a job to become a nanny in the home of her cousin. When she arrived, she was forced into virtual slave labor. Her employer never actually paid her the monthly stipend promised of 150 dollars a month and physically abused her. She was left feeling alone and helpless in a strange country where she knew no one. After three years of being abused and working at least 12 hours a day with no pay, she found a way to escape. She slipped a note to a neighbor's nanny begging for help. With the help of that friend, Ima Matul found shelter with an organization called CAST (Coalition to Abolish Slavery and Trafficking). She found shelter and safety, and more than that... Ima Matul found a life purpose.

Since that day in 2000, rather than finding solace in obscurity and comfort, Ima Matul has been working with CAST as a prominent activist and survivor organizer. Through her work with survivors, she has met with President Obama (when he appointed her to become a member of the US Advisory Council for Human Trafficking in December) as well as former Secretary of State John Kerry. And now, she can count one more feather to her cap: Ima Matul was a speaker on Tuesday at the DNC. In an interview with IndonesianLantern.com, Matul said;

In her speech before the delegates at the DNC, Ima Matul spoke confidently and passionately about Clinton's work with CAST; "Before human trafficking began to capture our attention, Hillary Clinton was fighting to end modern slavery."

Matul went on to praise Clinton for her courage and conviction, as well as her ongoing support of survivors of human trafficking. And if anyone in the Wells Fargo convention center in Philadelphia knows a little something about courage, it would certainly by Matul.