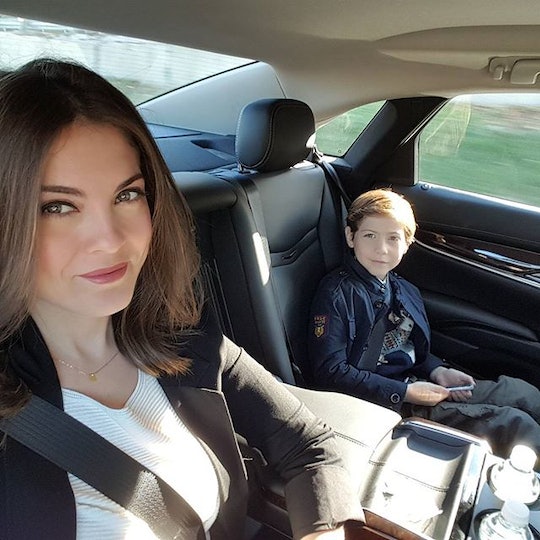 Who Is Jacob Tremblay's Mom? Christina Candia Tremblay Is One Amazing Mom

Little 9-year-old Jacob Tremblay is a bit of a media darling these days. With his adorable smile, his blue eyes and his good nature, Tremblay has been working the awards circuit like a boss. Something he may have learned from his parents, perhaps. And I'm telling you right now, they are very fantastic looking people. So who is Jacob Tremblay's mom, and how did she raise her little movie darling? With hard work and persistence, clearly.

Based in Langley, British Columbia, Christina Candia Tremblay is a stay at home mom to her three children — son Jacob (of course), and daughters Emma and Erica, according to HollywoodLife.com. All three of her children are in show business, so you can imagine that must keep her pretty busy. Her husband Jason is a police detective.

Her son, the breakout young actor, co-starred alongside Brie Larson in the Oscar-nominated movie Room. Given his amazing performance, his parents have kept busy shepherding their son from one awards show to another. And Jacob realizes how much they've done for him. When he won the Critics' Choice Award for Best Young Actor/Actress, the rising star made sure to thank his parents in an endearing speech he gave that night.

According to MTV.com, he's "winning" awards season. He has spent the season rubbing noses with some of the most famous people in Hollywood, from Lady Gaga to Jennifer Lawrence, Leonardo DiCaprio to Sylvester Stallone.

Meanwhile, the rest of us are dying to meet his incredibly gorgeous parents.

The genetically-blessed family caused a stir at the Golden Globe Awards by being not only lovely but clearly too-cool-for school, dressed to the nines and taking it all in like meh. Tremblay's dad, Jason, in particular, became an overnight social media sensation.

Luckily, Tremblay's mom takes it all in stride. "They just laugh about it," Jacob told Entertainment Tonight. "It's kinda funny, 'cause now my mom calls my dad, 'Hot Dad.'"

But Tremblay's mom Christina is just as hot.

Hopefully she is getting a chance to enjoy the awards season and the praise heaping up for her young son. As every mom knows, there is no better compliment than when someone says your kid is great. And since basically everyone on the planet thinks he is great, she clearly did a good job.

And now we can all start wondering what she'll wear to the Oscars tomorrow night (Sunday, Feb. 28 starting at 8:30 p.m. EST).