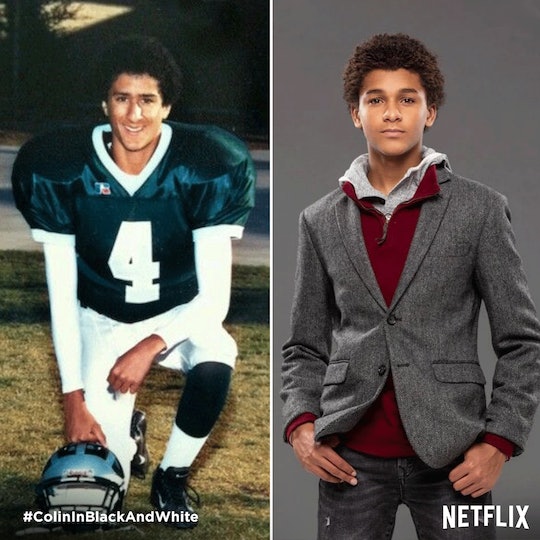 After nailing roles on Netflix's The Get Down and Amazon's Wonderstruck, you might already know who Jaden Michael is. And it will probably come as no surprise that the 17-year-old actor also landed a role portraying a young Colin Kaepernick in Netflix's new series about the inspiring football player and Black Lives Matter activist.

Colin In Black & White, a new limited series coming to Netflix, follows Kaepernick's rise to the NFL and his historic decision to kneel during the national anthem to protest systemic racism and police brutality. What began as a solitary act of protest on the sidelines of NFL games in 2016 became a national conversation about social injustice that continues today. Legendary director Ava Duvarney created the series alongside Kaepernick, and while a release date has not yet been set for the six-episode series, they have found their lead actor.

Michael, at just 17 years old, is already a veteran actor who first began his career as a model when he was just 2 years old, according to Popular TV. The New York City-based actor has worked alongside Viola Davis and Ellyn Burstyn in Custody, was featured as the lead role in Lorne Michaels’ comedy, Vampires vs. The Bronx, and also starred in Baz Luhrman's critically acclaimed The Get Down, to name a few.

Kapernick announced on Tuesday that Michael had been chosen to play him as a teenager on Twitter. "I never thought I would be casting a young me in a show about my life. I can’t wait for the world to see @ItsJadenMichael be an all-star on @Netflix #ColinInBlackAndWhite @Ava," he tweeted.

For his part, Michael shared the news on Twitter as well and said it was "truly an honor" to be chosen to play Kaepernick, "Wow, it’s truly an honor to be given this opportunity," he wrote on Twitter. "Thanks @ava and @Kaepernick&! Can’t wait to bring this much needed story to life, especially in these trying times."

Michael isn't just a good physical match for Kaepernick, he is also a young activist who took part in the Global Kids Council by Grey for UNICEF at 14 years old, ultimately giving a speech at the United Nations to give children official representation in the UN General Assembly by World Children’s Day. As a young Dominican actor, he spoke to Popular TV about his interest in playing characters who are proud of their heritage when discussing his role in Vampires vs. The Bronx. "To be able to play an American with a passion and love for his heritage was really heartwarming and I was able to assimilate to it," he told the outlet.

Michael certainly has big shoes to fill when playing the role of young Colin Kaepernick, but he seems like he's more than ready for the task.