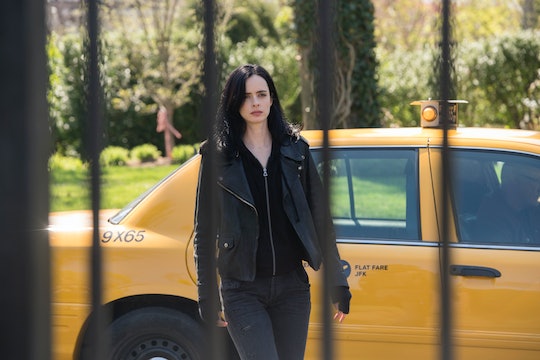 Warning: spoilers from Season 2 Episode 7 ahead! Well, it took almost half the season for it to happen, but Jessica Jones finally explained who the mystery woman with extensive (and volatile) superpowers actually is. Up until this point, she's remained unnamed, but at the end of Episode 6, it was revealed that this female villain is not the monster viewers thought she was. Because she's actually Jessica's mother. So who is Jessica Jones' mom, exactly? Let's just say that Alisa Jones' comic book origins just got a major rewrite.

You see, in the comics Jessica's mom doesn't survive the car crash, so if you were hoping to gain any insight on how this storyline will play out on the Netflix series, you're going to be majorly disappointed because it doesn't exist. This twist is completely unique to the show, though it does make you see this entire season in a very different light. Ever since we first met this character, she's been killing people left and right. However, Episode 7 allowed viewers to see all that Alisa has been through ever since that terrible car accident, and honestly, you can't help but feel sorry for her, in spite of all her terrible actions.

Remember that severely burned person who grabbed Jessica during her time at IGH? While searching the lab, Jessica had a flashback of that moment, though she had no idea who the person was. Now we know it was her mother, who had just woken up to discover her entire body covered in burns. Her attempt to escape led to the doctors, spear-headed by Dr. Karl, to put her in a medically-induced coma for five years while she underwent extensive reconstructive surgeries.

In the end, Dr. Karl was able to save her life and heel Alisa's physical injuries, but the procedures came with a price. She had developed a massive amount of strength that far exceeds Jessica's abilities and they tend to get out of control when she becomes upset. Naturally, as soon as Alisa woke up, she wanted to know what had happened to her family and demanded to see Jessica. Dr. Karl promised they could eventually be reunited, but he needed to keep treating her in order for it to happen. So as Jessica lived her life, thinking her entire biological family was gone, her mom remained trapped in the depths of the IGH labs, undergoing treatments and being drugged at the hands of Dr. Karl.

Obviously, it's easy to see the parallel's between Jessica and her mother — both of whom sadly have a ton of experience being controlled by men, who are all too eager to harness these women's powers for their own selfish goals. Kilgrave used mind control on Jessica for years, while the same type of thing has been done to Alisa with Dr. Karl. The one big difference is that somewhere deep inside, even when Kilgrave had Jessica do all those horrible things, she understood that it was wrong. But it seems Alisa truly thinks that the things she's doing for Dr. Karl are for the greater good. She even seems to be in a romantic relationship with Dr. Karl, despite that fact that he regularly drugs her when she steps out of line and doesn't agree with him.

He's Kilgrave all over again, basically, and I hope Jessica is able to save her mom from this brainwashed world she's been living in. Maybe then, they can try to rebuild a small part of their family without IGH getting in the way.