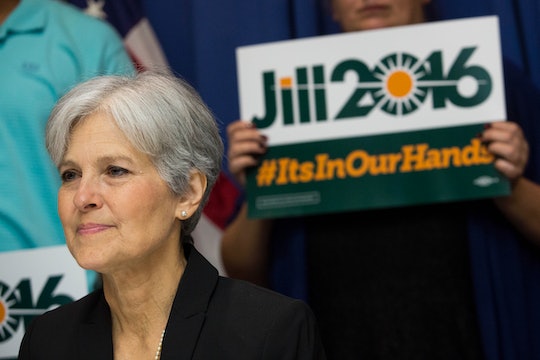 Who Is Jill Stein? The Green Party Candidate Is Even Further Left Than Bernie Sanders

Politicians think primary math shows that Secretary of State Hillary Clinton and former Celebrity Apprentice host Donald Trump will be the Democratic and Republican nominees for president, but many voters who aren't fond of either candidate are getting worried. Some in the GOP are still holding out hope for a third-party candidate, but disappointed Bernie Bros who are anti-Clinton may already have one in Jill Stein. Who is the Green Party candidate, and what does she stand for?

Voters who were hoping to cast their ballots for Vermont Sen. Bernie Sanders in November could do a lot worse than Stein; she's basically more Bernie than Bernie, plus she carries the same (useless) woman card as Clinton, as Trump would say, but without all that email server/Benghazi/problematic husband baggage. The Massachusetts physician could very well serve as a litmus test of Hillary-hating Sanders supporters. If they're truly backing Sanders because of his politics alone, Stein is a great alternative. At this point, Stein's actually looking like a more viable candidate than Sanders; she holds the record for the most votes ever received by a woman candidate for POTUS in the general election.

That's right, Stein has run for president before, back in 2012. She also ran for Governor of Massachusetts in 2002 and 2010, State Representative in 2004, and Secretary of State in 2006. She's yet to hold elected office outside of her town government in Lexington, Massachusetts, but hey, everyone's got to start somewhere, and at least we can say that she's ambitious. A graduate of Harvard Medical School, Stein has been practicing internal medicine since 1979, according to Inquisitr, and soon afterwards, became involved in environmental activism (hence the Green Party ticket).

As for her stances on the issues, she's actually even more liberal than Sanders; while they agree on breaking up the big banks, providing free higher education, and legalizing recreational marijuana, Stein goes even further, denouncing the war on ISIS (which Sanders supports). She's also notably less wishy-washy on gun control than Sanders; while Stein doesn't argue against anyone having a gun, she does note that "It is more dangerous to the occupants of a home to have a gun than not," according to On the Issues. Sanders supports a ban on assault weapons, but voted against the Brady Bill, which would have required a waiting period and a federal background check on those looking to purchase handguns. Stein has also called for a moratorium on GMOs, while Sanders is OK with them as long as they're labeled.

But is voting for Stein the right thing to do for liberals who aren't comfortable with Clinton? A vote for a third-party candidate will likely carry more weight than writing in Sanders once he's no longer on the ballot, but no third-party candidate has ever been elected President of the United States, and they often siphon off votes from the candidate whose politics are most similar to their own, meaning that voters casting their ballot for a third-party candidate could effectively hand the election over to the person they least wanted to win. For those too young to remember, Google "Ralph Nader," who is still often blamed for George H.W. Bush's presidency.

This year's election has illustrated that America may soon be ready to break out of the two-party system, but it's a little late in the game (as evidenced by the fact that many readers probably stumbled upon this article because they've never heard of the Green Party candidate, who's been running for president for 11 months now). Perhaps the best thing for Sanders and Stein to do is sit back, save up their donations for the next four years, and run together in 2020. Maybe by then America will be ready for them.