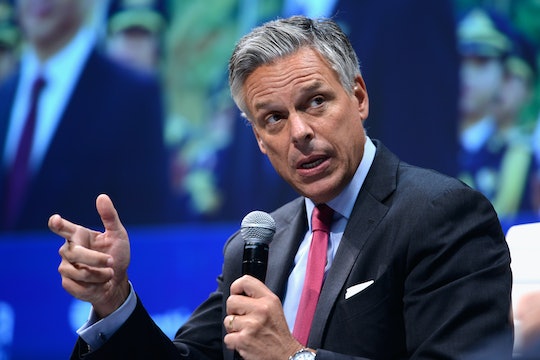 Each time President Donald Trump nominates someone for a position in his administration, intense speculation about this person's background and qualifications usually follows. Considering Trump has a penchant for picking unqualified and controversial characters for important White House roles, like Steve Bannon and Michael Flynn, to name a few, the scrutiny is often warranted. Now that Trump has officially selected former Utah Gov. Jon Huntsman as his pick to serve as the U.S. ambassador to Russia, questions about Huntsman's background are running rampant. So, who is Jon Huntsman, really?

On Tuesday, the White House sent out a press release announcing Huntsman's official appointment. According to The Hill, the press release read,

Governor Jon Huntsman has had a distinguished career as a politician, diplomat, and businessman. His robust record of public service includes service as U.S. Ambassador to China and to Singapore, Deputy United States Trade Representative, Deputy Assistant Secretary of Commerce for East Asian and Pacific Affairs, and Deputy Assistant Secretary of Commerce for Trade Development. He was also twice elected Governor of Utah.

If you've followed the ongoing hunt for the Trump administration's Russia ambassador, then you know Huntsman has been a top contender since March. At the time, Politico reported that Huntsman had been "offered" the position, a rumor the White House never confirmed. One could possibly assume the Trump administration was testing the waters to see how the public would react to Huntsman's appointment given all the controversy with Trump and Russia.

As for Huntsman's qualifications, his packed resumé looks similar to many longtime politicians. Huntsman, who is a Republican, served as Utah's governor from 2005 to 2009. After Huntsman left office, he served as the U.S. ambassador to China under President Barack Obama's administration from 2009 to 2011. Following Huntsman's departure from the Obama administration, he ran a failed bid for president.

Prior to Huntsman's most recent credentials, he served as the United States' ambassador to Singapore under President George H.W. Bush and was a White House staff assistant to President Ronald Reagan.

Yep, Huntsman has been getting his politician on for a long time.

Now that you have a rundown of Huntsman qualifications, you can see why he's a safe pick. Huntsman has the credentials, and he's led a scandal-free career thus far. It's also important to note that Huntsman is generally liked on both sides of the aisle, given his conservative background and progressive leanings. Although Huntsman is a conservative Mormon, he supported legalizing same-sex marriage in 2013. In an op-ed for the American Conservative, Huntsman wrote:

Conservatives should start to lead again and push their states to join the nine others that allow all their citizens to marry. There is nothing conservative about denying other Americans the ability to forge that same relationship with the person they love… This is both the right thing to do and will better allow us to confront the real choice our country is facing: a choice between the Founders’ vision of a limited government that empowers free markets, with a level playing field giving opportunity to all, and a world of crony capitalism and rent-seeking by the most powerful economic interests.

Considering America's relationship with Russia is precarious at best, Trump seems to have gone the right way this time. Huntsman's solid reputation in Washington, D.C. qualifies him to handle the complex and fraught situation that has enveloped Trump's presidency thus far.

The interesting part about Trump's appointment of Huntsman, however, is that the two have had a rocky relationship for years. In 2012, Trump tweeted that Huntsman "gave away" America to China:

As for Huntsman, he rescinded his support of Trump's 2016 presidential campaign after the infamous Access Hollywood tape was released.

Although there's no telling how Huntsman's relationship with Russia and Vladimir Putin will go, its obvious why he was given the job. Huntsman is a safe bet, and Trump can't afford to take any chances right now.