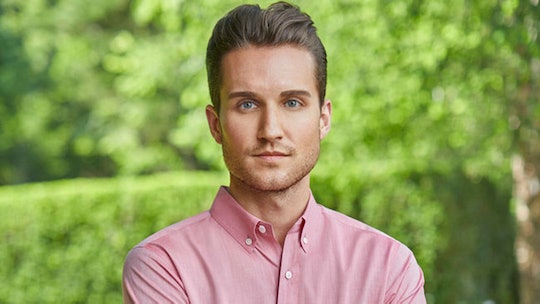 It's About Time You Were Introduced To Jordan From 'Summer House'

If you're sick of the cold weather, then Bravo's Summer House has just what the doctor ordered. The reality series, which follows friends who share a summer home in the Hamptons, returned for its third season on Mar. 4. With the premiere, Summer House introduced fans to a handful of new cast members, including an app founder with an Insta-worthy withering stare that could shake Tyson Beckford to the core. So who is Jordan on Summer House? Chances are you've come across at least one of his products online.

Joining Kyle Cooke, Lindsay Hubbard, Carl Radke, Danielle Olivera, and Amanda Batula, are newcomers Paige DeSorbo, Hannah Berner, and Jordan Verroi. And despite being torn after saying goodbye to Stephen McGee and twins Lauren and Ashley Wirkus after Season 2, the old cast is ready to see new blood — and to be honest, so are the fans.

"Obviously, some of the cast that's not here, I struggled dating-wise and obviously friendship-wise, but the new kids on the block are honestly really, really fun," Carl told AOL. "They're younger. You know, I'm in my 30s and these girls are in their 20s [and] Jordan just turned 30. So, I think young blood is good. They definitely bring a new perspective of having fun with us and they definitely fit right in."

According to his Bravo bio, Jordan is a "southern gentleman who is ready to broaden his horizons this summer and live a little with friends Hannah and Paige." Jordan's bio also mentions that he is one of the founders of CapGenius, an app that generates captions on your phone for social media.

In an interview with The Native Society, the Atlanta native revealed that he's always been interested in networking and building relationships, which helped his success with his app.

"The technology space has presented an incredible opportunity for me to connect my love for entrepreneurship with the ease and wide use of new emerging technologies," Jordan said. "I enjoy networking and being able to access my network of incredible contacts, friends and business associates: I have been able to maneuver my way deeper into the industry and successfully navigate into helping make CapGenius successful thus far."

While being a founder of an app is an impressive accomplishment in itself, per his still-active LinkedIn account, Jordan also has a few other projects under his belt. Jordan is an adviser to two other apps, Element and Pangea, and previously worked in client relations for the media company, Betches, which claims to be "the go-to brand and community for women around the world who desire to keep things real." Page Six uncovered that Hannah also worked at the media company, but as a video producer.

Now, a brief glance at Jordan's Instagram will tell fans that not only is the Summer House star active on social media, he's also a Caroline Gleason model and committed to the Bravo reality series.

So how will Jordan shake things up on Summer House? Fans will just have to wait and see. But Bravo hinted that Jordan is known as the "man of mystery" of the group and will leave his fellow castmembers "questioning his intentions and the truths behind his stories." Yikes.