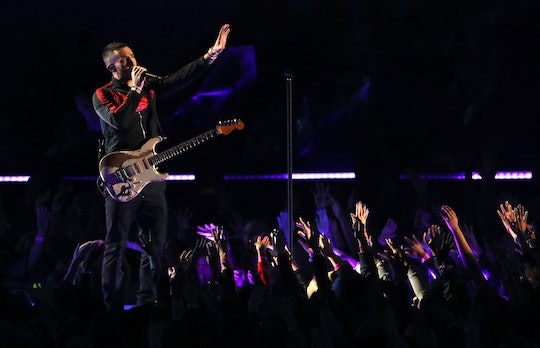 Right before Maroon 5 took the stage for Super Bowl 53, frontman Adam Levine gave a sweet shoutout by saying, "This is for you, Jordy." But who is Jordy? Turns out, Jordan Feldstein was Maroon 5's manager who went by the nickname of Jordy. But tragically, he died in December 2017, according to Variety.

Levine's shoutout is more than just a tribute to a manger though. The same Variety article reported that Feldstein was a childhood friend of Levine's, and was also the older brother of Jonah Hill. In December 2017, Feldstein was found in his Beverly Hills home after a "natural" death that the coroner attributed to a pulmonary thromboembolism. It was a hard time for Levine, obviously because he lost a close friend, but Variety also noted that it left Maroon 5 a bit in the lurch. The band had to find a new manager, and they ended up hiring someone who was also close with Feldstein. But no matter what their current management looks like right now, Levine's nod to Jordy was a sweet moment before he took the field at The Benz. It's obvious he was making sure Jordy knew how much they missed him, but also how much they appreciated his help in getting the band to a point that they could then lead the Super Bowl halftime show.

I can only imagine that the band was also missing Jordy when it came to the backlash Maroon 5 faced as they were announced to be the halftime performers. Allegedly everyone from Pink to Rihanna to Cardi B turned down the halftime show in order to stand with Colin Kaepernick, reported Vulture. Even Kaepernick's attorney spoke out against Maroon 5, with many performers trying to convince the band to turn down the gig so they could also stand in solidarity. Many think of the halftime show as an endorsement of the NFL, and with the way the organization has handled Kaepernick and the kneeling players, it's no wonder so many think the halftime stage should've been empty.

But Maroon 5 did what they could. In addition to having many notable musicians of color like Big Boi and Travis Scott, the NFL also had Dr. Bernice King — daughter of Dr. Martin Luther King Jr. — Congressman John Lewis, and Ambassador Andrew Young on the field for the official coin toss. The "one love" theme of the halftime show also seemed to be the band's attempt at talking about social justice, and Gladys Knight singing the national anthem gave viewers hope. But with all of this, it still doesn't seem to be quite enough. Many think Maroon 5 could have done better as far as the controversy surrounding Kaepernick and supporting the NFL goes.

Whether Jordy would've advised the band to say no to the Super Bowl or encouraged them to take a knee during the show, we'll never know. But Maroon 5's sweet dedication at the beginning of the show proves that they thought the world of him, and they know they wouldn't be there, in the middle of Mercedes-Benz stadium, if it weren't for him. Talk about one love.