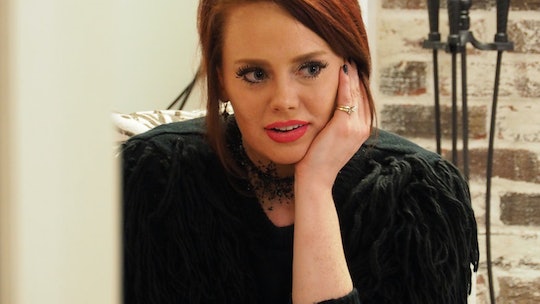 Yeah, We Need To Talk About Kathryn's BF, Joseph Abruzzo, On 'Southern Charm'

Kathryn Dennis is in love, and on the show, it looks like that guy is Joseph Abruzzo. On the Wednesday, May 29, episode of Southern Charm, the Bravo reality star told her fellow cast mates about her new boyfriend. And while the reality series has teased the relationship in Season 6, fans still don't know much about him. So who is Joseph Abruzzo? Southern Charm's Kathryn Dennis might have been smitten when the show filmed in October, but fans shouldn't get attached.

According to Bravo, Joe was a Democratic politician in Florida before he met Kathryn at a Miami Dolphins game. He was a member of the Florida House of Representatives from 2008 to 2012, and again in 2016 to 2018. Then in 2012 to 2016, he served as a member of the Florida Senate. However, Joe did not seek re-election in 2018, following a public divorce from his wife, Brandy Abruzzo. Per the Tampa Bay Times, the former senator was also accused of assault, and Joe has repeatedly denied the allegations.

When Kathryn told her costars about her relationship with Joe, no one seemed to approve. Craig Conover expressed his concern by comparing Joe to Kathryn's ex, Thomas Ravenel, a former politician who has been accused of assault and sexual assault.

“[Joe's] a disgraced politician,” Craig said, per Us Weekly. "He’s not running for re-election because of his divorce.”

Following the Southern Charm episode, Joe responded to the cast's criticisms of his character in an interview with Entertainment Tonight.

"While briefly dating Kathryn, I never met the cast of Southern Charm," Joe said. "They surely do not know me, the manner of which I retired from public office with awards and accolades, nor my character and values. Therefore, the false comparisons and misrepresentations made by some of the cast and production about me is simply an attempt to add more drama to their show."

The former senator then asked to be left out of the Southern Charm narrative.

"I only wish the best for Kathryn and her future, and respectfully ask the cast to refrain from carrying out the will of producers and focus on stories of their own lives," he said.

Although they are still together on recent episodes of Southern Charm, it goes without saying that Joe and Kathryn are now broken up. Speaking with Bravo's The Daily Dish podcast, Kathryn explained why.

"We just met whenever my friends had met him. I didn't know him well enough to pick up on patterns to then make a decision whether or not to move forward," she said. "Whenever I noticed Danni [Baird] being upset with me because she didn't agree with the way he talked to me or things he did, that's when I started to think, hmm, if my friends are turning on me, I do not need this man in my life. Girls are more important than any kind of dude."

So how did Kathryn split with the former politician? “I just ghosted him,” she revealed. “I learned what that meant on Urban Dictionary and I did it.” Classic.

Now, Kathryn is in a relationship with Hunter Price, a 26-year-old country singer and songwriter. In an interview with Entertainment Tonight, Kathryn shared a few adorable details about her new beau.

"For the first time in my life, it feels super natural," she told the publication. "And I feel really, really safe with him, being vulnerable. I could go on and on, but he’s great."

And while Kathryn is still seeing Joe on recent episodes on Southern Charm, it looks like Hunter is the real deal.