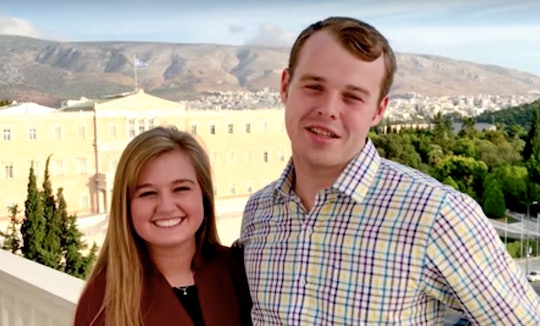 Here Are 4 Things To Know About Joseph Duggar

Anyone who has ever watched TLC has most likely heard of the Duggar family. People first got to know the family with their reality show 19 Kids & Counting, and now fans are getting to know the next generation of Duggars better with Counting On, which follows the lives of the older Duggar children as they get engaged, get married, and have babies. While the Duggar daughters have managed to take social media by storm, a few of the Duggar sons have started to come out of the woodwork as well. While fans might have been wondering who Joseph Duggar was last year, after getting married in 2017 he seems to be upping his media profile.

Joseph is the seventh of Jim-Bob and Michelle Duggar's brood of 19 kids. He was born in 1995, and has remained close to his siblings, according to TLC. While Joseph's sisters have been firmly ensconced in the limelight for the past few years (Joy-Anna Forsyth, Jill Dillard, Jessa Seewald, and Jinger Vuolo in particular), Joseph hasn't seemed to be as invested in seeking out a social media presence. But it looks as though all of that is about to change; after all, Joseph just got married in September. Which means that he can finally have his own Instagram account, according to Duggar family rules. Although he really could have gotten that ball rolling once he was engaged, to be fair to the Duggars.

He Just Got Hitched

Joseph married 19-year-old girlfriend Kendra Caldwell on Sept. 7 after a 3-month-long engagement, according to People. He surprised Caldwell with a sunset proposal at his sister Joy-Anna's wedding, according to TLC. At the time, the 22-year-old reality star told People that being married was "something he always dreamed of," explaining:

It is an amazing feeling to be husband and wife. It’s something that I’ve always dreamed of to have a wife and to raise a family in a way that honors the lord. We are to very excited to see what God has in the future for us.

The couple shocked fans with their especially passionate kiss on being proclaimed husband and wife. Perhaps especially so considering Kendra's father Paul Caldwell, who is a pastor, presided over the event. But hey, it was their actual, for real first kiss ever with anyone. Allowances must be made.

He's Carrying On The Family Business

Joseph might be a reality star, but that doesn't mean he's willing to just sit back and watch all of that sweet TV cash roll in. After attending a one-year bible study course at Crown College in Knoxville, Tennessee, Joseph came home to work in the family's house-flipping business, according to Inquisitr. The Duggar family has been working in the housing industry for five generations, and Joseph is reportedly interested in getting his real estate license to branch out a little.

He's Dedicated To His Faith

The Duggar family is known for being deeply religious, and Joseph doesn't appear to be an exception to that rule. When he and Kendra, who was also raised in a large, religious family, announced their engagement via the Duggar family blog, they were both quick to thank God for bringing them together:

We are so excited to be engaged and look forward to a lifetime together. We are so grateful for how the Lord brought us together, and we look forward to this special time of engagement and to some day serving Christ as man and wife.

Fans Think He's Got A Baby On The Way

After Joseph and Kendra got married in September, they took off for a romantic honeymoon in Greece. And now that they've returned, fans are counting down the hours until the newlyweds announce they're expecting their first baby. As The Hollywood Gossip reported, fans are pointing to a recent photo of Kendra at a family function with her family in Arkansas, where her body is partially hidden by other family members. I mean... I guess that could be proof? But, honestly, it's a stretch.

But, really, we're going to need a lot more proof than that, I think. Perhaps it's time for Joseph to fire up the old Instagram and interact a bit more with his fans.