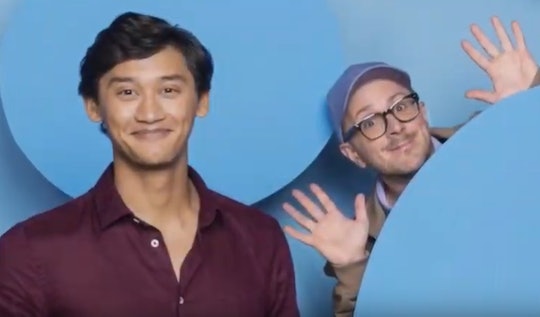 Who Is Joshua Dela Cruz? The "Blues Clues" Remake Has Found Its Host

It's not an easy job to take a job in a reboot. Especially when that reboot is beloved by '90s kids the world over. But that's exactly what Joshua Dela Cruz is going to have to do. Who is Joshua Dela Cruz, you might ask? Well he is going to be the new "Steve" in the Blue's Clues remake, and he's going to have a lot of high expectations riding on his performance. Luckily this guy is a seasoned professional.

More Like This
This Is Everything You Need To Throw An Amazing CoComelon Party
Everything There Is To Know About The Friends Reunion
Here's Everything You Can Watch On Lifetime This Mother's Day
Apple Card Family: How It Works & What Your Kids Can Learn

It's been 12 years since the floppy-eared puppy Blue and her human pal Steve (replaced by a new buddy named Joe) were solving puzzles together on Nickelodeon's Blue's Clues, but Millennials probably remember it well. There was a real sweet innocence to the antics of Steve, Blue, and even fellow puppy Magenta, if he happened to make an appearance. Kids were fans of the fact that Steve often broke the famed "Fourth Wall," which is when the actor speaks directly to the audience. And of course, kids tend to be big fans of being included in adventures. Now nearly 13 years have passed and a whole new generation of kids will be joining Blue on her new adventures.

Joshua Dela Cruz will be the new host of the Nickelodeon show Blue's Clues & You, which has begun production in Toronto, Canada as per Hollywood Reporter. The 30-year-old actor formerly acted in Aladdin on Broadway as Iago as well as a brief stint in 2017 as Aladdin himself. Dela Cruz was also onscreen on ABC's Time After Time and CBS' Bull, as per Playbill.

The original host of Blue's Clues, Steve Burns, was actually part of the decision process to hire his replacement and he told People that he couldn't be happier with the choice:

I had the great honor of being part of the search for the new host, and I give Josh two thumbs up! He can definitely fill my shoes, and the rugby shirt.

Burns wasn't the only one to be excited to welcome Dela Cruz. Shelly Sumpter Gillyard, executive vice president for talent, music, and events at Nickelodeon Group, told Hollywood Reporter that she knew Dela Cruz was the right man for the job as soon as she saw him:

The search for the new host of Blue's Clues & You was no small task, but we knew as soon as we met Josh that he was the perfect choice. From his genuineness to his comedic timing and range, there was no doubt that he could carry the show on for the next generation of preschoolers.

Fans of Blue's Clues will remember that there was comforting innocence about the original series. You could always count on Blue and Steve to figure out the clues and get a little silly along the way. The graphics were simple and the humor was surprisingly clever.

So if Joshua Dela Cruz can pull all of that off, he'll earn his striped rugby shirt for sure.