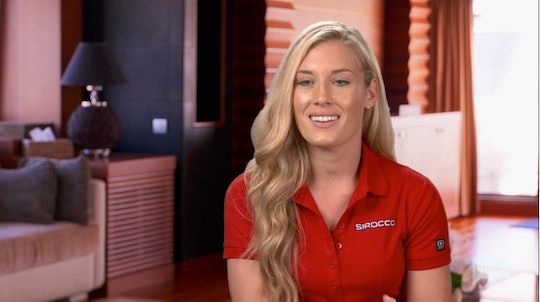 Chef Mila Kolomeitseva may have been the first ever female chef in the Below Deck franchise, but sadly, she wasn't long for the Sirocco. After getting fired, Mila was replaced by third stew Anastasia Surmava in the galley, leaving a stew position open. Captain Sandy Yawn's replacement makes her debut on the Jul. 15 episode of Below Deck Mediterranean, so viewers may be wondering who June Foster is, exactly. Well, like a few stews who have come before her, she's a yoga instructor with a background in bartending and serving. But unlike her fellow crew members, she's also a published author.

Last year, she published The Girl and the Golden Leaf, a Christian adventure novel about an orphaned teenage whitewater rafting guide named Tia, who gets kidnapped along with her twin brother. June's world travels appear to heavily influence the book. Per the synopsis: "From Chile's exotic Río Futaleufú, to her captivity in the Amazon Rainforest and the slums of Buenos Aires, Tia's deep faith touches everyone she meets...but will her faith be enough to survive the darkest pits of humanity?"

June's Instagram is (predictably) full of travel photos and it's clear June loves what she does. In a sneak peek of the episode in which she's introduced, June explains, "I’ve always been a bartender or server but also I love traveling, so I put two of my favorite roles together and got into yachting."

The Sirocco has been charting the French Riviera this season, and Captain Sandy caught wind of June, who had been working in the region. "I’ve been working in the south of France for four months. I can’t speak a lick of French but I don’t think I ever will," June admits in the preview clip. But it's clear Captain Sandy is impressed with her qualifications, which include fine dining experience. A glimpse at her resume shows she trained at the Super Yacht Crew Academy in Newport, Australia, and received her certifications from the Royal Yachting Association in Beaulieu-sur-Mer, France.

June has previously worked both as a deck hand and a stew, but Captain Sandy makes clear that she's desperate for someone to work the interior after her recent staff shakeup.

"It's definitely not an ideal situation to have a stewardess come on board like, two hours before we pick up charter," Chief Stew Hannah Ferrier admits. "I'm really hoping that Aesha can step in and show her how it's done."

For her part, June seems much more relaxed and laid back than her predecessor Anastasia, who freely admits that she's a high-strung "Type A personality."

"I have an immigrant work ethic," Anastasia explained when she first boarded the Sirocco earlier this season. "I got a B- once and I was like, 'My life is over!'"

However, that drive might serve her well in replacing the floundering Chef Mila, who left a lot to be desired when it came to feeding the high-profile clientele of the Sirocco. Mila was fired during the Jul. 1 episode of Below Deck Mediterranean, and despite some moderately horrifying homophobic comments she made, Sandy insisted her termination was solely a result of her sub-par food.

You can see how everyone fares in their new roles when Below Deck Mediterranean airs Monday nights on Bravo.