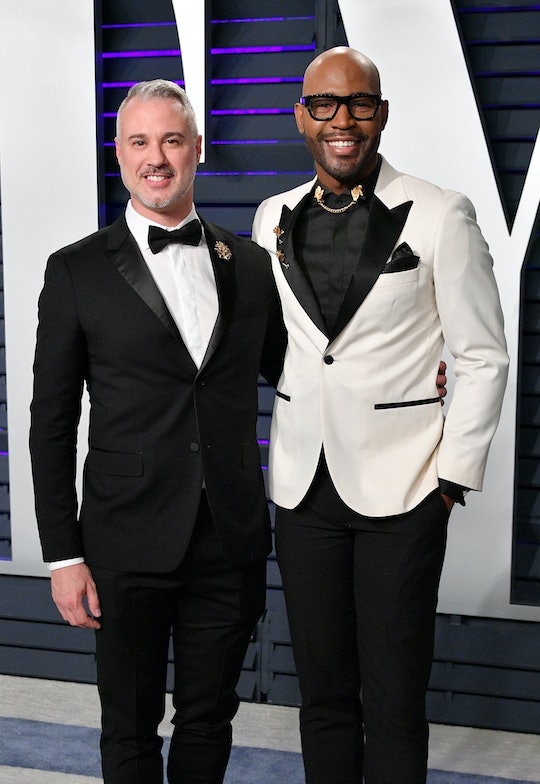 Karamo Brown's Longtime Partner Is An Incredible Stepdad To His Kids

If you watch Queer Eye on Netflix, I don't have to fill you in on how wonderful Karamo Brown is. The culture expert is arguably the anchor of the show, and as a member of the "Fab Five," he focuses heavily on the emotional makeover aspect of the show. As the featured guest gets a new wardrobe, new cooking skills, new home, and new hairstyle from the other members, Brown is there to make sure they're able to take it all on emotionally. Because he is a beautiful human being, but you know this already. As for what you might not know? Some of you could be curious about who Karamo Brown's husband is, and this is where I can fill you in on the lovely human he has chosen for his partner.

Karamo Brown has been in a relationship with Ian Jordan, an assistant director who has worked on several children's programs, for the past nine years. The two have been co-parenting Brown's two sons, 21-year-old Chris and 17-year-old Jason, together for nearly a decade, which clearly means they're heavily committed to their lives together. But they never considered marriage... until now. In May 2018, Brown proposed to his longtime love Ian Jordan, and of course he accepted because honestly, how can anyone say no to Karamo Brown?

Brown announced his engagement with a sweet Instagram post of the couple showing off their new rings and the caption: "Last night, in front of family & friends, I asked my best friend and the love of my life, “will you marry me?” He said YESSS!!!! I’m engaged!"

The pair are reportedly planning to get married on Oct. 10, 2020, as per Entertainment Tonight, and Jordan told the news outlet he is so excited not only for himself, but for their little family as well:

I feel overwhelmed, loved. There's no one in my life who makes me want to be a better person. Not just for myself, but for our family.

Brown also told the news outlet that Jordan's relationship with his sons has been one of the things he loves best about his new fiancé:

The moment that he stepped in to be a stepfather to my kids, you just can't ask for someone better than that. I just feel so much love. I mean, this exciting time of our life for the show being a success, having my kids here, my son's mother, family, the love of my life. This is it.

Now that Jordan, who has worked on movies like School of Rock and Raven's Home, is preparing to marry Brown, I hope he's ready for a pretty extravagant celebration. Because the Queer Eye star is planning a three day affair for their nuptials in 2020 that will apparently include a carnival element, as he told Page Six: "[For] the Friday night of our three-day wedding event, I just paid for a Ferris wheel, I’m not even joking."

I have a feeling he'll get a little help from the other members of the Fab Five to put together a celebration worthy of a decade of loving someone, which includes creating a beautiful family together. Because that's awfully special in and of itself.