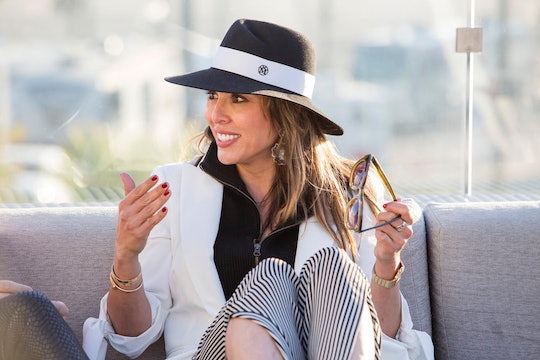 Kelly Dodd Has Been Dating Again On 'RHOC'

Kelly Dodd’s marriage went through the ringer during the past couple of seasons of The Real Housewives of Orange County. After staying in a relationship with a husband who she’d clearly grown apart from, Kelly called it quits and this season, it looked like she was finally ready to move on. Fans went kind of bonkers for her mystery "Milkman," leading many to ask, who is Kelly Dodd’s new boyfriend? The RHOC star has moved on from her ex-husband, but it’s not what you think.

The Manhattan Milkman, otherwise known as Frank Acosta, made an appearance in RHOC this season and seemed like a potential new love connection for the recently divorced mom. While they were out to dinner, Frank told Kelly that if she didn't tone down her feisty attitude, she might not find someone else to settle down with. And although she told him that she needs someone like him in her life, she said in a talking head interview, "It’s just fun for right now." And in her Bravo blog, Kelly reiterated that there’s nothing serious between them. She met Frank, who co-owns the milk delivery business The Manhattan Milk Company, at a boxing event in Las Vegas through mutual friends and they hit it off — as friends.

"We were friends first and even talked about going into business together," Kelly revealed on her Bravo blog. "We are still good friends. I love spending time with him. Being that he lives in New York, you could say he's geographically undesirable, but at least our connection is real. We still talk and see each other. I love our friendship and our bond, but I think it could never work out because of the distance. His business is in New York, and it means everything to him."

But just because Kelly isn't dating Frank the Milkman, it doesn't mean that she hasn't moved on from her ex. "At this point in my life, I actually need to be alone and want to be alone," she added. "Am I confident that I won't end up alone? It's not a fear that I have, at least not right now."

For the most part, Kelly is just enjoying her newfound single status after being married for 11 years, and I think she’s entitled to do as much casual dating as she wants. "Shannon [Beador] and I go out quite a bit," she told People in an interview. "We go out to dinner, talk about the same misery that we have quite a bit. It’s just fun that we can have a good time without having somebody that we have to come home to and yell at us."

She’s also "open to getting married again" as long as it’s with the right person who she’s taken enough time to get to know and live with beforehand. But right now, Kelly’s single and enjoying life that way before rushing into anything serious.

After a sometimes tumultuous marriage with her ex, Kelly’s divorce was finalized in February. They were together since 2004 and spent years on and off and going through extended separations before finally deciding to call it for the last time in October 2017. But as friends and RHOC fans have seen, it may have been for the best. "We aren’t good together," Kelly told Daily Mail in September 2017. "Maybe we’ll be better to each other when we are divorced and are friends. But right now we are both miserable and it’s not good for either one of us, let alone our daughter."

I kind of love the idea of watching Kelly serial date next season on RHOC, so maybe it’s best that she stay untethered for the time being.