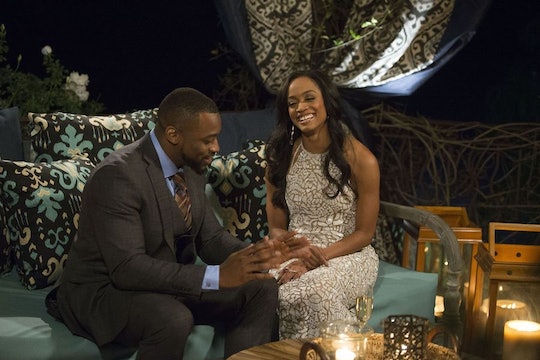 This 'Bachelorette' Contestant Is A Devoted Dad

This season on The Bachelorette, Rachel is being given a pretty wide range of men to choose from and once she eases out the duds, she’s going to be left with a decent roster, which will possibly include pro wrestler Kenny Layne, a.k.a. Pretty Boy Pitbull Kenny King. He might be one to ruffle a few feathers as far as the other men are concerned though, so aside from that tongue twister wrestling name, who is Kenny on The Bachelorette? Season 13 is full of the usual good looking and successful men, but Kenny is also a single dad, which brings down the tough guy factor a few notches.

The 35-year-old wrestler has a 10-year-old daughter who he says on his Bachelorette bio is "literally my reason for living. She makes my life better." But before he became a dad, he competed on Season 2 of the WWE reality competition series Tough Enough and though he didn’t win the season, he made it to the final four and was trained by some pretty big wrestling names. After that, Kenny made a name for himself in the independent wrestling world in Florida, California, and Las Vegas. As recent as January 2017, Kenny has still been going strong in the independent wrestling arena, but now it looks like he’s ready to find a Mrs. Pretty Boy Pitbull Kenny King. Or something like that.

Chris Harrison told Yahoo TV that although Kenny’s wrestling persona would have you believe that he’s all about this macho womanizing life, in actuality he’s a lot softer than that. Though if he’s forced to have to defend himself, he absolutely will.. "He is a tough-as-nails competitor, though, and you will see that competitive side flair up," Harrison revealed. "He has some run-ins with other guys, one in particular. He is very proud and when push comes to shove, he is going to push back."

Even though Kenny will apparently get into it with a contestant or two this season, he will also be making some real friends, which is kind of adorable. On an Instagram video he posted of his daughter, fellow Bachelorette contestant Iggy Rodriguez commented, "You know she got like 5 more uncles now…" So he definitely has no trouble making friends, as long as those friends aren’t total jerks who try to wake the bear.

I’m not sure how far Kenny will get this season on The Bachelorette, but it’s very clear that there’s a lot more to him than a wrestling persona and hopefully Rachel can see that too.