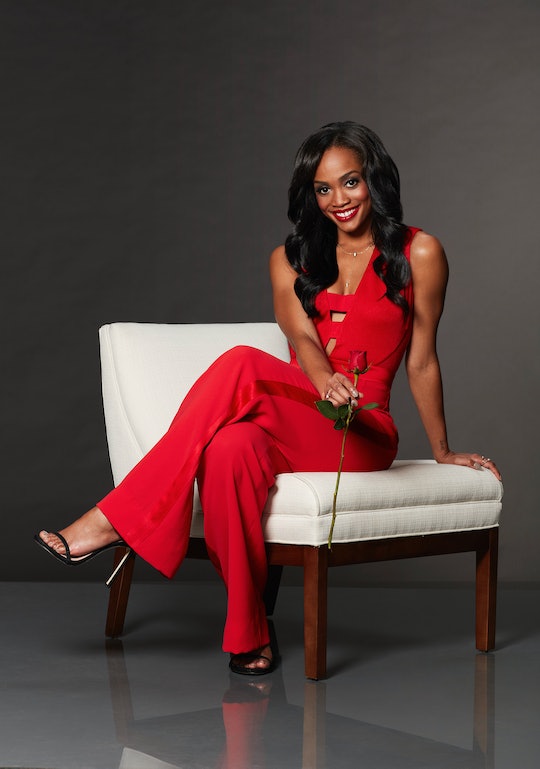 Rachel Lindsay was amazing from the start on Season 21 of The Bachelor and when Nick Viall sent her home, it was heartbreaking for us all. She'd been such a shoo-in up until that point and to see her turned down indefinitely was hard to watch. Luckily, she made the perfect comeback that we'd all love to do to an ex and became the new Bachelorette. So let's just hope that Rachel's Bachelorette 2017 contestants don't turn out to be terrible. But, by all accounts, there seem to be a few genuine gems in there this season.

In true Chris Harrison form, he promised in a Facebook Live video on Wednesday, May 17 that Season 13 of The Bachelorette will be "the most dramatic" ever, but also added that the 2017 Bachelorette suitors are "the most successful, most diverse" than any of the seasons before, which is a refreshing change from the boy band types some seasons are littered with.

Now, don't get me wrong — there are definitely some ridiculously good looking guys with perfectly coiffed hair thrown in there, but it's definitely an eclectic group this season. Rachel's Bachelorette 2017 contestants have some very impressive resumes, though judging by Harrison's descriptions, it also seems like they're going to make up another fun and dramatic season.

Adam is a 27-year-old real estate agent who, according to Chris, will be bringing along something or someone with him this season, which will be popping back up throughout the season as a little Easter egg of sorts. How... mysterious.

Basically a new and younger Uncle Jesse, Alex, 28, is an information systems supervisor. And according to his Bachelorette bio, the most romantic gift he's ever given is a car, so he's definitely not cheap.

Anthony, 26, is an education software manager whose Bachelorette bio says that in a party, he's "more of the laid back one that turns into the party starter as the night goes on." Interesting.

Since every season has to have someone aspiring to be something else, Blake E., 31, is apparently an aspiring drummer.

Blake K. is a 29-year-old Marine vet who claims on his Bachelorette bio that Chipotle is his life. Can't argue with that.

With his swooped highlighted blonde hair, Brady, 29, looks like he belongs with the guys from Season 12 of The Bachelorette, so it's no big surprise that he's also a male model.

Described by Chris as "a good guy," which is a good thing since The Bachelorette could use some of those each season, Bryan is a 37-year-old chiropractor.

Bryce, 30, is a firefighter who said on his Bachelorette bio that his greatest accomplishment has been "making my parents proud and inspiring my little brother." Kind of adorable.

On the younger side of the contestants this season, Dean is a 26-year-old startup recruiter with a definite baby face.

Chris commented that DeMario is "smooth, too smooth," which should probably be a red flag. He also said that the 30-year-old executive recruiter might not be on The Bachelorette for the right reasons. There's always one in the group.

Diggy, or Kenneth, 31, is a senior inventory analyst, who looks a lot more innocent than he probably is. His Bachelorette bio cited a Cancun trip with a sexual positions contest as being the most outrageous thing he's ever done.

As Chris joked, Eric, 29, is one of the typical kinds of contestants, in a way, since he's a personal trainer. Maybe he's going to be on the lookout for protein at the Bach mansion, a la Chad Johnson?

Apparently the 27-year-old executive assistant is also a former camper whose camp counselor as a kid was Rachel, the Bachelorette herself. I can't decide if this is sweet or creepy.

Grant, 31, is an emergency medicine physician who, according to his Bachelorette bio, used to sing "Ice Ice Baby" at Bar Mitzvahs. Naturally, fans need to see footage of this immediately.

Not to be confused with Diggy, Iggy, 30, is a consulting firm CEO and, according to Chris, "Someone else who Rachel really respects and has a liking to."

Much like Rachel, 32-year-old Jack Stone is an attorney, so they might either have a lot to talk about or argue about.

Jamey is another professional in his thirties and at 32, is a sales account executive, which makes him seem like a decent candidate who may really be looking to settle down.

At 35, Jedidiah is another Season 13 Bachelorette contestant in the medical field, as he works as an ER physician. He also likes to dance to trap or hip-hop music, so there's that.

Jonathan, 31, is listed as a "tickle monster" this season, which isn't his profession but instead, according to Chris, something he becomes known for. Oh boy.

Another contestant who works in law, Josiah, 31, is a prosecuting attorney who is definitely not a dancer, so bring on those dance competition group dates.

According to Chris, the 35-year-old professional wrestler is also a dad and has a much softer side than you might initially think.

Kyle, 26, is another of the younger 2017 Bachelorette contestants and works as a marketing consultant. And according to his Bachelorette bio, "looks matter for the ideal candidate" when finding a partner.

Chris said that Lee, the 30-year-old singer/songwriter of the season, ends up rubbing guys the wrong way and acts as more of an instigator than anything else.

Lucas' profession is "Whaboom," which according to Chris can be used as a noun, verb, or adverb in regards to the 30-year-old contestant, and will be explained more as Season 13 of The Bachelorette goes on.

As the guy who apparently shows up opening night in a penguin suit, Matt, the 32-year-old construction sales representative, likely makes a strong first impression on Rachel this season.

26-year-old Michael is a former professional basketball player and since Life & Style magazine reported that Rachel is thinking of getting into sports broadcasting, maybe this is the perfect match of all.

Milton, 31, is a hotel recreation supervisor, which sounds like a job you'd find at Kellerman's on Dirty Dancing, but his Bachelorette bio also says that he attributes his college basketball skills to those of Kobe Bryant.

All Chris could say about the 26-year-old product manager was, "You'll be seeing him on the show," so whether that's a good thing or not remains to be seen.

When Chris talked about Peter in the Facebook Live video, he cautioned, "Watch out for Peter," so maybe the 31-year-old business owner is a bit of a playboy?

Chris likened Rob to Tom Cruise, which you can't really unsee once you see it. But aside from that, the 30-year-old law student might have Rachel's profession in common with her.

Arguably one of the cutest Season 13 Bachelorette contestants, Will is a 28-year-old sales manager who apparently has lots of experience dating women from Tinder.

Rachel's 2017 Bachelorette contestants definitely range in age as well as talents, but there's no denying that there are some real winners (pun intended) competing for her love this season.