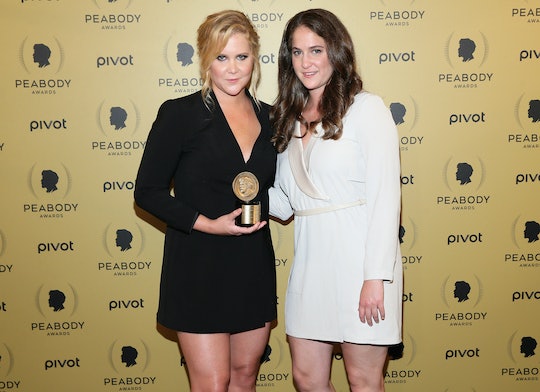 Although she just made her relationship with her new boyfriend official, Amy Schumer’s 2016 Golden Globes date is her sister, Kim Caramele. Caramele, Schumer’s sister, is most often referred to as her #roadmanager on social media. She’s also Schumer’s best friend, part of her writing staff for Inside Amy Schumer, and associate producer of Trainwreck. So the title "road manager" is sort of uh, well, a joke.

It's great that Kim and Amy will attend the Globes together, because they do almost everything together. Their social media accounts are mainly a bunch of inside jokes they've created while traveling, laughing at how they’re dressed when caught on cam, and just chilling.

But as much as I'm excited to see the Schumer sisters tear it up with some much-deserved girl power on the red carpet, I'd be lying if I wasn't still just a bit hopeful that Schumer's brand-new boyfriend will be tagging along, too, (and that we’ll get to peep him in a suit). Earlier this week, Schumer made her relationship with Ben Hanisch Instagram (and White House) official. (RIP, Facebook official annonucements.) Hanisch is a furniture maker, and as The Cut points out, his career profession is basically the hottest thing in the world, something all men who want to date women should aspire to. Take notes, dudes.

Lest we be forced to choose who's the better date, Schumer explained she’s bringing both Caramele and Hanish to this year's Golden Globes show. (And though there was some earlier confusion as to how the two met, Schumer said she didn't meet her boyfriend on Bumble.)

She captioned her announcement:

#tbt me and my date to the globes #roadmanager my bf will be there too and we did NOT meet on bumble. Great site just not how we met

So Schumer will have her whole squad: her sister, her carpenter boyfriend, and, hopefully, the same dress as her other BFF, JLaw. If that’s not making it, what is?