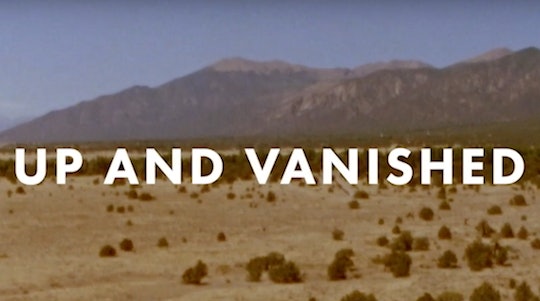 Season 2 of the hit true-crime podcast Up and Vanished focuses on the disappearance of a young mom from Crestone, Colorado, a town so remote, it takes 45 minutes for a first responder to arrive. But who is Kristal Anne Reisinger and why and how could a person who has everything to live for simply go missing?

According to the website ID Crimefeed, Reisinger was 29 when she disappeared around July 13, 2016, after telling her landlord she had recently attended a drug-fueled drum circle, an event that had corresponded with the new moon, where she feared she has been subsequently assaulted under the influence.

The young mom had been on a quest for spiritual enlightenment in coming to Crestone in the first place, a former boyfriend told Denver's Fox affiliate, and was interested in Hinduism, Buddhism, and Tarot cards. She had left her now-5-year-old daughter with the girl's father to relocate to the wooded remote enclave of only 143 — a town that nevertheless is well-known for religious retreats.

The geographic area is sacred ground for the Navajo Nation, and many other sects and groups have built compounds in the vicinity. The young woman had easily settled into a town some call the "New Age Capitol" of the world, according to KDVR, the Fox News affiliate in Denver.

The TV station's website reported she had begun singing in a local band and, while she was into the party scene before her disappearance, she always made the time to call her daughter and regularly check in with friends and family.

Initially, Saguache County Sheriff Dan Warwick wondered if she had simply taken off of her own will, since Reisinger had previously gone on a two-week “walk-about." But, with an apartment fridge full of food and her possessions and phone left behind, as the Denver Post and KDVR reported, Reisinger's friends began to suspect the worst.

According to KDVR, Ara McDonald, the young woman's landlord and the same person to whom Reisinger had confided her suspicion she had been attacked at the drum circle, checked her tenant's cell phone in the wake of the disappearance. “From what was on her phone, it seems like she was on her way someplace. She needed to go someplace,” McDonald told the news station.

According to McDonald and multiple sheriff's department sources, and as reported by the news station, the last person to have called Reisinger is a local man with a history of assaulting and drugging a victim, a name that is currently being withheld.

From here, the case went cold... until Up and Vanished. Payne Lindsey, the series' host, decided to take on Reisinger's case as the focus of season 2. After all, his season 1 mystery, the disappearance of Georgia beauty queen and teacher Tara Grinstead, helped lead to two arrests, according to The Wrap.

“Google it all you want, but you’re not gonna find much," Lindsey told The Wrap about just how few details there were in the Reisinger case when he decided to tackle it. "And that’s why we’re spending so much time in this tiny town, to give answers to people.”

Lindsey's company, Tenderfoot TV, is the source of several podcasts which have reached more than 235 million downloads, according to the Denver Post, so hopes are high that new information will come to light in this case as well.

It remains to be seen whether or not you'll find out clearly what happened to Reisinger, but Lindsey, the Up and Vanished team, and investigators in Colorado are doing their best to bring the case to a close.

Listen to Up and Vanished wherever you listen to podcasts, with new episodes released every Monday.