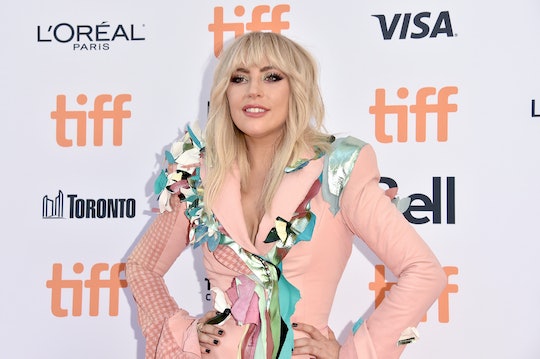 Who Is Lady Gaga Dating? The Singer Is Actually Engaged

As everyone gears up for the 2018 Grammy Awards this Sunday, it's especially important to make sure you do your research. And I'm not talking about the nominees, although that's important too. No, mostly you need to know who is dating who... because let's face it, checking out the audience is at least half of the entertainment for the night. So you're going to want to know who your favorite performer might be bringing to the show; for example, who is Lady Gaga dating? Here are all the deets, so you're prepared well before you sit down for Grammy night.

As most of you definitely remember, the Bad Romance singer spent five years engaged to Chicago Fire's Taylor Kinney. The couple parted ways in July 2016, leaving the singer newly single after a long relationship. The Joanne singer was spotted with a new man in January 2017, just five months after her break from Kinney. Her new main squeeze turned out to be Hollywood agent Christian Carino of Creative Artists Agency. Carino represents big names like Miley Cyrus, Justin Bieber, and even Gaga herself, so he's no stranger to the lives of the rich and famous. Which is great, because you don't get much more famous than the six-time Grammy award-winning singer. It looks like Carino can handle the pressure though; after he asked her father's permission to pop the question, the couple got engaged on Nov. 1.

So who is this man who managed to win the heart of Lady Gaga, you ask? Despite the fact that he seems to represent a large chunk of the creative power in Hollywood, Carino seems to keep to himself. He was rumored to be dating Walking Dead actress Lauren Cohan previously (who plays Maggie Green), but neither he nor Green confirmed the relationship. Newsweek reported that 48-year-old Carino is close friends with fashion designer Tommy Hilfiger. Beyond that, he's managed to stay under the radar, even as he dates one of the biggest music icons of our generation. Which makes sense; he's a talent agent, after all. The guy has to know a secret or two about how to navigate Hollywood.

Rumors that the couple were dating began to fly after he was spotted kissing her before she performed for the halftime show at Super Bowl LI last year. And, around the same time, the couple were spotted together at the 2017 Grammy Awards. Now that they've made things official, it's a pretty safe bet that Carino will be her date this year as well.

One thing fans can be certain of about Carino, however, is his devotion to Gaga. Us Weekly reported that the talent agent has a giant tattoo of Gaga's face just under his shoulder, and you don't get much more permanent than ink, right?

Neither Gaga nor Carino seem terribly eager to discuss their romance, and who can blame them? The singer suffered through an intensely public break-up with ex-fiancé Taylor Kinney, and when she released her Joanne album in 2017 fans couldn't stop speculating that the lyrics of just about every song must be about him. It makes sense that the singer and her fiancé might want to create a few boundaries this time around.

That being said, it will be great to see Gaga at The Grammys with Carino. She's been nominated for two awards this year, Best Pop Vocal Album for Joanne and Best Pop Solo Performance for "Million Reasons." She's also set to perform, so here's hoping the health struggles that forced her to cancel the European leg of her concert tour in 2017 are improved.

Mostly, though, it will just be nice to see Gaga happy. And if the mysterious Christian Carino is the man for the job, I'm alright with that.

More Like This
Rihanna's First Post Since Giving Birth Confirmed She's Performing At The Super Bowl
The Hocus Pocus 2 Soundtrack Is A Spooky Mix Of Old & New
The Cannon Legacy Is Strong: Here's A Look At All Of Nick Cannon's Kids
Serena Williams Shares How Her Daughter Comforted Her After Losing A Big Match