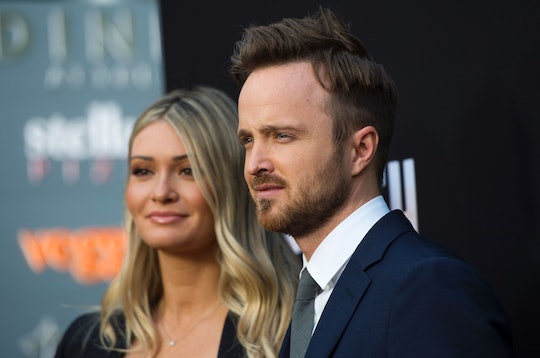 Lauren Parsekian Is An Anti-Bullying Superhero

This week, actor star Aaron Paul and his wife, Lauren Parsekian, shared some exciting news with fans: Their family will soon grow by one as they're expecting their first child together. And while Breaking Bad star Paul may pass his flair for acting on to their son or daughter, his wife will have a practiced expertise in teaching him or her about treating classmates with kindness. Of course, that's a parent's duty, but it's also who Lauren Parsekian is. Why? Well, the 30-year-old expectant mom is an accomplished anti-bullying advocate who's dedicated to eradicating bullying among girls in schools across the United States and around the world.

Although Parsekian co-founded the nonprofit Kind Campaign way back in 2009, it rose to real prominence when Paul shouted it out in a 2014 Emmys acceptance speech. The resulting massive influx of traffic to the site caused it to crash, according to The Independent, but all those flocking to learn about the cause undoubtedly soon discovered that it was well worth their time. According to its website, the campaign "brings awareness and healing to the negative and lasting effects of girl-against-girl bullying," largely through in-school assemblies and screenings of the documentary on the subject that Parsekian and co-founder Molly Thompson developed themselves.

Long before she was traveling to elementary, middle, and high schools, and even universities, to encourage girls to treat one another right, Parsekian herself was a preteen dealing with some pretty nasty behavior from her classmates. In fact, those girls made her feel so "alone and ugly and worthless" that she even thought about killing herself, she told People in 2014. Instead, the experience launched her on what would become an adulthood mission to stop other young people from both bullying and being bullied. After all, it's pervasive problem, as Thompson, who was also bullied in her school years, told People:

[Bullying] is such a universal issue. The emotional experience that females go through is the same no matter where you live. Our goal is to start a conversation in schools and let girls realize that we all play a role. Simply by being conscious of the things we say and do, we really can create change.

So, the two embarked on a cross-country road trip to film what would become their anti-bullying documentary after earning film degrees from Pepperdine University. Finding Kind, which was subsequently released in September 2011, is now part of the Kind Campaign Founders Assembly series. Parsekian and Thompson have facilitated theses assemblies in hundreds of schools in North America, as well as completed 11 international school tours, according to the Kind Campaign website.

Now, eight years after it was originally founded, the Kind Campaign is still going strong — and growing. It even released an apparel collection at Kohl's and come out with new initiatives each year, such as a curriculum and a camp. And, really, this can only serve to improve the school environment of Paul and Parsekian's baby, when he or she heads off to socialize and learn with classmates for the first time. And more importantly, Parsekian will surely be on top of teaching her little son or daughter all the ways to treat others with respect, and how to help a peer who may be getting picked on.

So, best of luck to Parsekian and Paul as they prepare to become parents. It's pretty much a given that going to be one good-lookin', talented, and incredibly kind kid. And perhaps by the time he or she enters school, bullying among girls (and all students) will be an all-but-forgotten ugly vestige of the past.