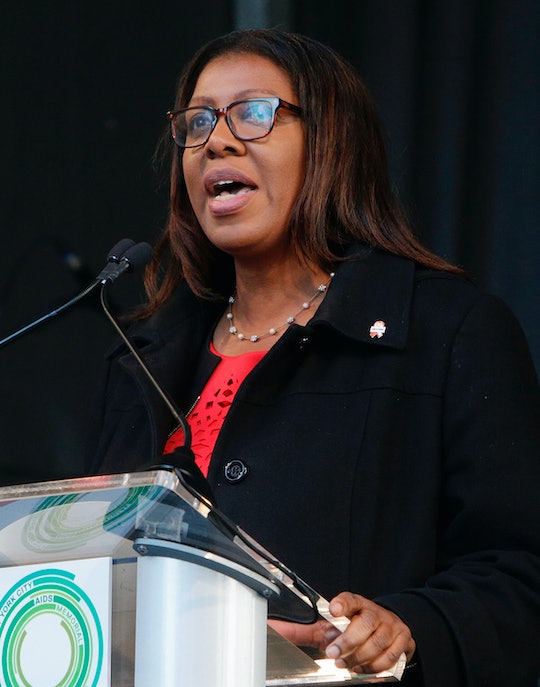 7 Facts To Know About Letitia James, NY's Next Attorney General With Eyes On Trump

The new year will see some interesting changes for the people of New York. Snow and stuff, of course, but also a fresh new Attorney General. And I have to tell you, this should be viewed as seriously exciting news for the people of that state. If you have no idea who Letitia James, the incoming New York attorney general, might be, sit down and get ready to get excited. Because this woman isn't afraid to stand up for what she believes is right; and she's certainly not afraid to investigate a sitting president.

Letitia James won the 2018 election to become the next attorney general in November, beating out three other candidates to take over the post. James ran her campaign on a platform that included passing a bill to change the double jeopardy laws in New York.

James also has her eye on federal pardons that could be handed out by the White House for possible illegal activities that happened in New York, according to Newsweek. As she told NBC News, "I think within the first 100 days this bill will be passed. It is a priority because I have concerns with respect to the possibility that this administration might pardon some individuals who might face some criminal charges, but I do not want them to be immune from state charges."

So what do we know about the woman who is about to become New York's Attorney General?

Letitia James was born in Brooklyn, New York in 1958, as noted on her official website. She attended New York public schools throughout her childhood, and attended both Howard University on Washington, D.C. and Columbia University in New York City. She has been practicing law in New York since 1989.

In other words; she knows what's up in the state she represents.

At the outset of her career, Letitia James worked in Legal Aid in New York City, with a specific focus on offering legal services to vulnerable people and members of the community who are disenfranchised. While working for Legal Aid she established the Urban Network, a coalition of African American professional organizations offering scholarships to young students.

Standing Up For The Locals

As a longstanding member of City Council for the 35th District of Brooklyn, James was perhaps best known for going against then-mayor Bill DeBlasio by advocating against the building of a stadium for the Brooklyn Nets in her neighborhood. James did this because she didn't want her constituents to be evicted to make way for the construction of the stadium, and she was firm on her stance. As she told The New York Times in 2009: "We would attend their games in Newark. I'll sponsor the buses to go there."

James might have become the newly-elected attorney general for New York as a Democrat, but she was a member of the Working Families Party for years; she even became a City Council member when she was still part of that party.

Toe-to-Toe With Department Of Buildings

When a fire nearly destroyed the Broken Angel house in Brooklyn in 2006, the New York City Department of Buildings hit the iconic home's owner, Arthur Wood, with multiple citations and didn't want to allow him to reoccupy his home. James stepped in as his lawyer pro bono and fought to got him back in his home, according to The Gothamist.

Big Banks Should Watch Out

James clearly isn't afraid of crossing anyone; she has gone after six major financial institutions for providing financial support to gun manufacturers. And she also made ending gun violence a major priority in her bid to become attorney general.

James has made one particular man a priority in her 2019 plans for investigation: President Donald Trump. She told NBC News that she plans on using her office to look at any illegal activity, not just by Trump, but by those who were surrounding him while he was living in New York City:

We will use every area of the law to investigate President Trump and his business transactions and that of his family as well.

It's an exciting time for the people of New York. They are about to be represented by someone who does what she believes is right, regardless of the potential political consequences.