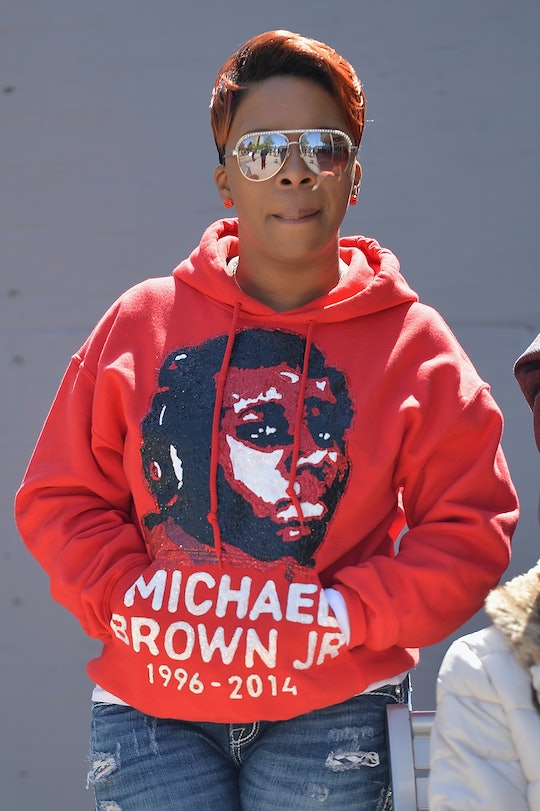 Who Is Lezley McSpadden? Michael Brown's Mother Will Speak At The DNC

On a hot summer day in August 2014, a Ferguson, Missouri, woman learned that her unarmed 18-year-old son had been shot and killed by a white police officer. The incident highlighted the racial tensions between police and African Americans across the county and catapulted the Black Lives Matter movement into the national spotlight. And since then, Lezley McSpadden, Michael Brown's mother, has used her platform of grief to condemn the extrajudicial killing of black men, women, and children by law enforcement officials. As a speaker at this week's Democratic National Convention, she'll bring her message to the political stage once more.

During his speech at the Republican National Convention last week, the GOP's presidential nominee, Donald Trump, did not mention the Black Lives Matter movement at all, even after video footage of two police shooting deaths of black men went viral earlier this month. The deaths of Alton Sterling and Philando Castile were catalysts for a new surge of peaceful protests nationwide as well as the ensuing, tragic shooting deaths of police officers in Dallas and Baton Rouge. Race relations and policing is a vital issue the next president will have to address, and so Hillary Clinton invited McSpadden, as well as other "Mothers of the Movement" to speak during day two of the DNC.

The officer who shot Michael Brown that day claimed that the teenager had both charged him and attempted to grab his gun during a confrontation, and a grand jury later declined to indict him. Lezley McSpadden maintains that her college-bound son should not have died the way he did, and since his death she's been a regular presence in the news and advocacy circuits, keeping Brown's memory alive.

In additional to appearing at other Hillary Clinton campaign events, McSpadden also spoke before a United Nations committee at a human rights conference in Switzerland and has filed a wrongful death lawsuit lawsuit against Wilson, the city of Ferguson and former police chief Thomas Jackson. McSpadden has publicly pushed for a bill that would require police officers in Missouri to wear body cameras at all times. In April, she memorialized her son in a powerful scene in Beyoncé's visual album Lemonade, and her memoir, Tell the Truth & Shame the Devil, which chronicles Brown's life, too, came out in May.

In her work to establish a better relationship between black Americans in law enforcement, McSpadden has also founded the Michael O.D. Brown We Love Our Sons And Daughters Foundation, which also aims to improve health outcomes, advance education, and strengthen families in African American communities.

"I just don't look at myself as being an activist or any of those things people try to label me as," McSpadden told the Associated Press. "I've always just wanted to be treated fair and equal, and that's what I'm fighting for for my son right now."

And even though McSpadden is an outspoken defender of many African Americans who have died during confrontations with police since her son did, McSpadden's main goal is to remind the world that Brown was a person who mattered. In an August 2015 interview with Al Jazeera America, she described him to anchor Tony Harris:

In a New York Times op-ed after Sterling and Castile died, she wrote a simple message to their families: "When you’re ready, and if you need me, I’ll be there for you." Speaking at the DNC — among a lineup of other devastated mothers – will offer McSpadden the opportunity to continue this work and support others in similar, heartbreaking situations.

More Like This
Reddit Is Stunned By Mother-In-Law Trying To Breastfeed Her Granddaughter
What You Need To Know Before Talking To Your Kids About Gun Violence
My Nanny Showed Me How To Be A Mother
New Parents Google Around 6 Baby Questions A Day, New Survey Says