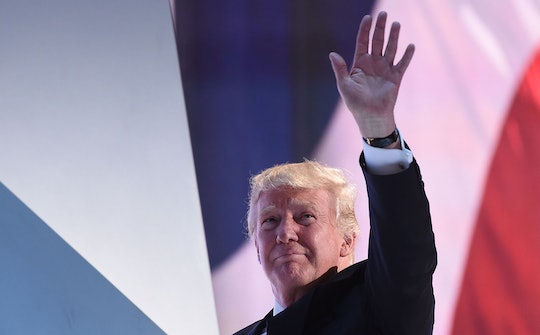 Before Donald Trump could officially accepted his party's nomination as the presidential nominee at the Republican National Convention Thursday night, the text of his speech leaked. According to Politico, which posted Trump's speech online Thursday, a rival group reportedly sent the draft in an email. (It was not clear whether the draft was a finalized version or vastly different from the one Trump was due to deliver later in the evening.) Unsurprisingly, Trump firmly positioned himself as the "law and order candidate" in the leaked speech, promising protect the country from terrorism and condemning the recent shooting deaths of police officers. But Donald Trump's speech didn't mention Black Lives Matter once, and that's a problem.

Black Lives Matter is an advocacy group that exists, in part, to demand accountability when police officers kill black men extrajudicially. The movement erupted in force after Officer Darren Wilson shot and killed 18-year-old, unarmed Mike Brown in Ferguson in 2014. Black Lives Matters protests of the police shooting deaths of Alton Sterling of Baton Rouge and Philando Castile near St. Paul, Minnesota, have catapulted it back into the national consciousness this month — just in time for the Republican National Convention.

Black Lives Matter does not advocate violence, nor does it suggest that because black lives matter other lives don't matter. But that's the reputation is has gained in conservative circles, a stance that was amplified after a lone sniper killed five police officers at an otherwise peaceful Black Lives Matter protest in Dallas following the deaths of Sterling and Castile. Not long after, a gunman killed three police officers in Baton Rouge.

Those horrible tragedies (which Black Lives Matter did not support in any way) elicited swift condemnation from Trump in his leaked speech:

America was shocked to its core when our police officers in Dallas were brutally executed. In the days after Dallas, we have seen continued threats and violence against our law enforcement officials. Law officers have been shot or killed in recent days in Georgia, Missouri, Wisconsin, Kansas, Michigan and Tennessee.

On Sunday, more police were gunned down in Baton Rouge, Louisiana. Three were killed, and four were badly injured. An attack on law enforcement is an attack on all Americans. I have a message to every last person threatening the peace on our streets and the safety of our police: when I take the oath of office next year, I will restore law and order our country.

Of course, Trump is absolutely right that these killing were harrowing, horrible attacks that should not under any circumstances be repeated. What he omits is the fact the activists assert that deaths like Sterling's and Castile's — parts of which were both caught of video that went viral — occur because of systemic and deep-seated racism within some law enforcement agencies. This, of course, does not justify the murder of the police officers, and Black Lives Matter activists would not tell you it does. But it is a pervasive issue that the next president of the United States must address.

Trump, however, has totally erased an important component of the racial tension that exists in America, and will certainly still plague the nation when the next Commander-in-Chief takes office. On July 12, for example, during an interview with FOX News's Bill O'Reilly, Trump simply dismissed the movement. "First of all, I think the term [black lives matter] is very divisive," he said. "... I would say they're dividing America."

By continuing to insist that Black Lives Matter is essentially some sort of terrorist organization, instead of recognizing and affirming it for what it really is, Trump is further alienating voters of color and deepening racial divides with his own rhetoric, which is, in fact, divisive. His leaked RNC speech sets the tone for a truly tone-deaf potential presidency by carefully editing the narrative of race and policing in America to absolve law enforcement of its responsibility to protect and respect all Americans. He's forgetting that blue lives and black lives can matter at the exact same time.