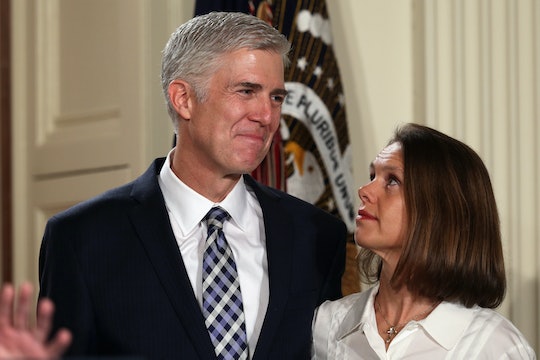 President Donald Trump made a huge announcement during primetime on Tuesday night. He nominated Judge Neil Gorsuch to the Supreme Court to replace Justice Antonin Scalia, who died last year. When Trump announced Gorsuch as his pick, he called up Gorsuch's wife, but just who is Marie Louise Gorsuch? Neil Gorsuch wife is his college sweetheart, according to Heavy.

Marie Louise, whom Neil reportedly just calls "Louise" when he writes about her in his book, works alongside Neil on their farm in Denver raising "horses, chickens, and goats," according to the SCOTUS blog. She also reportedly helps Neil "arrange ski trips with old friends and new associates from [Neil's] former law firm." (I seriously hope she also attends these trips and is not just Neil's personal party planner. Like, give a woman a much-needed vacation.)

Louise also is a mom to their two daughters, Emma, who is 18, and Belinda, who is 16, according to Heavy. According to the Daily Camera, a local Boulder, Colorado, paper, Neil and Louise met in college. The paper described Louise as "a British woman he met at Oxford." Other than that, information on Louise is limited. There don't appear to be any public interviews with her, and there are no photos of her or her family working on their farm.

As many Twitter users pointed out, it was a huge moment for the couple. Neil has been a judge on the United States Court of Appeals for the 10th Circuit since 2006, according to Politico. He is a graduate of Columbia, Harvard, and Oxford, and he clerked for two SCOTUS justices: Justice Byron White and Justice Anthony Kennedy, according to USA Today. In fact, USA Today also found that he would be the first person to serve alongside a justice that he previously served for as a clerk.

Jeffrey Rosen of the National Constitution Center seems to think that he will appeal to both sides, but he is no doubt a very conservative choice, according to Politico:

The real appeal of Gorsuch nomination is he’s likely to be the most effective conservative nominee in terms of winning over Anthony Kennedy and forging conservative decisions on the court. He’s unusual for his memorable writing style, the depth of his reading and his willingness to rethink constitutional principles from the ground up. Like Justice Scalia, he sometimes reaches results that favor liberals when he thinks the history or text of the Constitution or the law require it, especially in areas like criminal law or the rights of religious minorities, but unlike Scalia he’s less willing to defer to regulations and might be more willing to second-guess Trump’s regulatory decision.

It's unclear whether Democrats will allow Gorsuch to be confirmed, especially after Republicans delayed Merrick Garland's confirmation so long that it became the longest period in history that any nominee had to wait for confirmation. It wouldn't be surprising if Democrats waited this one out for a little while, and they would have many reasons for doing so.