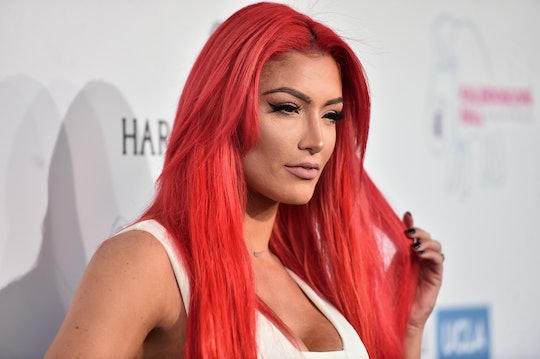 Wrestling fans will sure get a kick out of Celebrity Big Brother this season. (Kicking is allowed in wrestling, right?) One competitor is a WWE champion, and fans of the sport will definitely want to tune in to see how she fares in the house. Non-fans, however, will be wondering who is Celebrity Big Brother contestant Natalie Eva Marie?

Natalie Eva Marie is a former professional wrestler for the WWE — who also starred in Total Divas. Natalie got her start in 2013, when she randomly saw a casting call for WWE, according to ESPN. Her audition turned into a four-week tryout, followed by a developmental contract with WWE, where her middle name, Eva Marie, became her wrestling name. Shortly after, Natalie received an offer to appear in a new reality show called Total Divas, which followed a group of women of the WWE, as per ESPN.

Her fame skyrocketed while she starred on the show, but by August 2017, she announced that she had formally left the WWE. “Today I'm saying a bittersweet goodbye to @WWE,” Eva tweeted at the time. “Thanks to the entire team, and YOU, my fans, for these 4 years! #AllRedEverythingForever,” she added, referring to her famous electric red hair color.

Natalie seems pretty pumped to be joining Celebrity Big Brother this season. "I am so excited to get into the Big Brother house, because I am a super fan," Natalie said in an intro video on Big Brother's Twitter. "And I have to say, I hold grudges though, so if anybody does me dirty in the house, I'm coming for them, 100 percent," she added.

And in an interview with ET Canada, Natalie opened up about what inspired her to join Celebrity Big Brother this season. When her manager called her with the offer to appear on the show, Natalie told ET Canada that saying yes was an "easy decision." She explained: "I love doing anything that is outside the box, and something new, and this is a once in a lifetime opportunity."

She also shared her main takeaway from last season of Celebrity Big Brother, which she learned from actress Shannon Elizabeth's mistakes. "She knew the game so good, and she was a beast competitor, which I absolutely admire and respect," Natalie told the ET Canada host. However, she came out the gate guns a blazing, way too fast. I mean, she showed her true cards ... which immediately put a massive target on her back, so ... I'm taking a little bit of note from that for my game this season. Lay low, chill." She also added that she's going to try to repress her competitive nature and not stand out too much, in hopes that playing in the middle will help her win.

As per CBS, you can catch Natalie on Celebrity Big Brother when it premieres on Monday, Jan. 21 at 8 p.m. on CBS. Episodes will air multiple times a week up until the finale on Feb. 13, when a winner will be crowned and awarded $250,000.