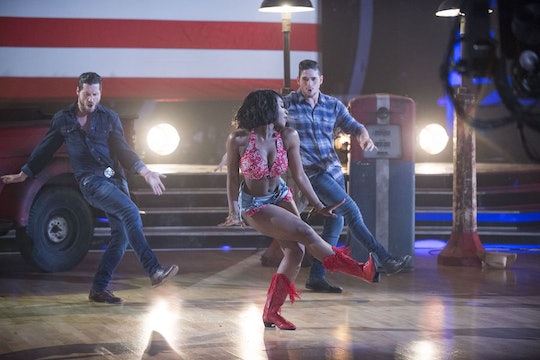 It's always super sweet when one of the stars in Dancing With the Stars has family in the audience, and it turns out that Normani Kordei's grandma was enjoying the show long before the Fifth Harmony group member was given a spot on the Season 24 roster. So who is Normani Kordei's grandma? Barbara made a Dancing With the Stars appearance and she seems like a lot of fun. During Kordei and pro partner Val Chmerkovskiy's post-dance interview on DWTS, they announced that her grandma was in the audience and Kordei explained how she'd been a fan of the show for years.

Kordei and Chmerkovskiy recently appeared on The Ellen DeGeneres Show and Kordei talked about how her grandma Barbara had been a huge fan of DWTS for years and even keeps a book to keep tally of the weekly scores and eliminations, so Normani's grandma is a legit DWTS fan. Kordei herself has been watching the show since she was 12, thanks to weekly showings with Barbara and over the season even Chmerkovskiy has gotten close to Kordei's family.

In the interview on Ellen, he even joked that he was most concerned with pleasing Barbara rather than the actual judges and there was footage of Barbara and Chmerkovskiy dancing together backstage. So yeah, she's definitely a fun grandma.

On DWTS Monday night, Kordei's mom revealed that her grandma actually made all of her costumes growing up and played a huge role in raising her. Especially as Kordei's mom struggled through cancer, her grandma remained close to her.

Throughout the season, Kordei's grandma has been in the audience and likely not just because she's apparently a huge fan, but also because her talented granddaughter happened to be competing on her favorite TV show. So it's been like a win-win for her and she's been supportive every step of the way. She was even in the audience during Kordei's Ellen interview. She also spoke to the talk show host and said that despite the odds being slim that Kordei would be so successful at such a young age and compete on DWTS, it wasn't something that surprised Barbara. To which Kordei said, "She's my biggest fan."

The most important thing about Kordei's grandma is that she's forever supportive of Kordei both on and off on DWTS. She already has a repertoire with Chmerkovskiy and the fans love her too. Because, how could you not?

In her intro package, Kordei said that one of her best memories was watching DWTS with her grandma on the couch, making them probably the cutest thing ever.

Barbara was a huge part of Kordei's life growing up and as much a part of her immediate family as her parents, so it's not all that surprising that she's been a devoted audience member for this season. And just maybe, Kordei's grandma will prove to be some kind of good luck charm for her by the very end of Season 24.