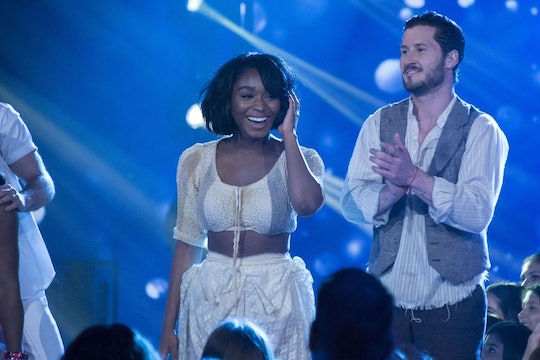 Normani & Val Are Too Adorable For Words

It’s hard to deny how seriously cute some of the pairs on Dancing With the Stars are this season, and who are we to say that the bond shouldn’t go beyond the ballroom and rehearsal room floor, right? Maybe it’s just wishful thinking, but there has to be more to some of these pairings than a simple love of dance, which is why Normani Kordei and Val Chmerkovskiy should date after Dancing With the Stars is over. Well, that and they seem to have this great back and forth any time someone talks to them off the dance floor. And although they haven’t come out to say they have any kind of mutual attraction, it’s like you’re just waiting for them to kiss already. (This isn't just me, right?)

Not only do the pair kill it on the ballroom floor every week, and have since the beginning of the season, but Kordei and Chmerkovskiy also share a love of dance in general. Although Kordei isn't a trained dancer like the DWTS pro, she has been part of the group Fifth Harmony for years and being a singer also includes having some dancing talent and discipline. Sharing such an important interest and passion could be enough to shift this lovable friendship into a full-fledged romance. The potentially for that to happen is definitely there.

While the 11-year age difference is daunting to some, it’s also hard to look away when there’s footage shown of Kordei and Chmerkovskiy in rehearsals or on the sidelines taking a breather together. Chmerkovskiy seems to support her so much already and they’ve looked so comfortable together since the beginning of the season. Carrying that over to some kind of relationship outside of the show would make total sense. That's not to say that there's anything wrong with them being just friends (and adorable ones at that), but part of me just can't help but hope it leads to something more.

After the duo’s Week 8 performance where Kordei opened up about the intense cyber bullying she endured, Chmerkovskiy posted a photo of the two of them during their dance and wrote a caption that was insanely sweet.

Nothing in this world matters unless you make it so... thank u for opening up. thank u for sharing your heart with the world. thank you for trusting me and allowing me to not just do my job but to also do something I can be proud of for the rest of my life. proud of you. and I hope you felt that tonight. how proud you made me, and have done so every single day for the last 2 months... love you my dear Normani, this is just the beginning for you, and I can't wait to celebrate you and your story for years to come.

As a fan, it’s hard not to instantly 'ship them for this reason and so many more.

Plus, Chmerkovskiy’s already met her family and has a great thing going on with them too. In an interview on The Ellen DeGeneres Show, Chmerkovskiy joked about getting Kordei’s grandmother Barbara's approval over any judge’s. "I don’t think I care as much about Len’s 10 as much as I care about Barbara’s feedback," Chmerkovskiy said.

The chemistry is one thing, but having an in with the family takes it to a whole other level. Whether or not anything happens though, the pair clearly have solid ground for a legitimate friendship and will hopefully remain an important part of each other's lives long after the dancing is over.