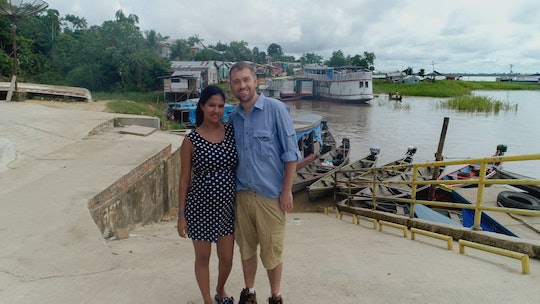 90 Day Fiancé launches yet another spinoff with 90 Day Fiancé: The Other Way, in which Americans travel abroad to try and build lives with their partners in other countries. One couple should already be familiar to fans of 90 Day Fiancé: Before the 90 Days — Paul Staehle and Karine Martin return to the franchise after their failed attempt to obtain a visa for Karine to live in the United States. So her husband decided to move to Brazil instead. New viewers wondering who Paul is have a ton to catch up on.

For starters, his two-season tenure on 90 Day Fiancé: Before the 90 Days revealed a complex criminal record. In 2007, he was indicted on charges of arson in the second degree and burning personal property to defraud an insurer, according to public records. The charges carried with them a sentence of 15 years in prison, but in 2014, he accepted a plea deal, which he explained on the show. He pleaded guilty on both counts and was sentenced to probation, having already served 18 months in prison awaiting trial.

Then in 2013, Paul said on the show, he and an ex-girlfriend took out restraining orders on one another, which he violated by sending her a text message. Since he was still on probation, Paul was incarcerated over the offense.

Over the course of 90 Day Fiancé: Before the 90 Days, Paul explains his criminal history to Karine, her parents, and viewers, and her family ultimately appears to move past it. Season 2 of 90 Day Fiancé: Before the 90 Days also chronicles Paul and Karine's miscarriage, which turned out to be the couple's second, according to Us Weekly. They successfully carried a third pregnancy to term and Karine gave birth to Pierre Martins Staehle last March.

But in the Season 2 tell-all special, where the couple announced their pregnancy, things went less than smoothly. Karine joined via satellite from Brazil, while Paul was back in the States trying to raise enough money for her visa. His mother had apparently refused to cosponsor her, and without the financial support of his family, Paul admitted that he didn't have enough to cover Karine's immigration. (Hence, the couple's participation in 90 Day Fiance: The Other Way.)

But in the special, Paul revealed that he'd be pursuing a DNA test after the baby was born to prove his paternity, because he'd found "romantic and flirtatious" messages on Karine's phone. Obviously, this was a heartbreaking thing for a pregnant woman to hear (over video chat, no less), and Karine bit back, saying, "I hope my visa doesn’t get approved and I don’t go to America because my husband speaks bad about me."

After Karine gave birth, however, Paul decided that moving to Brazil himself was the couple's best chance at being together. They continue to suffer a language barrier and communicate via a text translation app, but will being in the same country stabilize their relationship? You can find out when 90 Day Fiancé: The Other Way premieres on June 3.