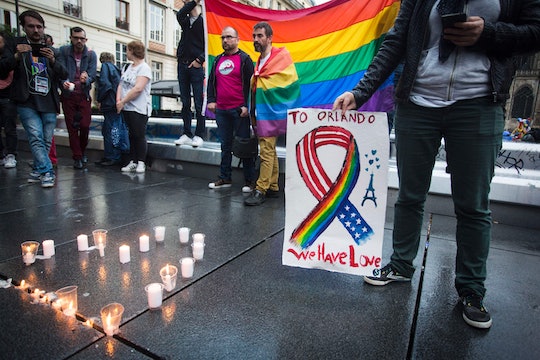 Who Is Peter O. Gonzalez-Cruz? His Name Was Listed As Another Orlando Shooting Casualty

As details emerge, the world mourns the lives lost in the mass shooting at a popular Orlando gay hotspot on early Sunday morning. At least 50 people are dead and 53 others wounded after a man who walked into Pulse nightclub and gunned down revelers who were just out to have a good time. The City of Orlando set up a website and have begun releasing the names of people killed during this horrific terrorist attack. One of the victims of the Orlando mass shooting is Peter O. Gonzalez-Cruz, about whom we know little — other than the fact that he, like so many others, was struck down by senseless gun violence.

As officials work to identify those killed in Sunday's attack and notify next of kin, names of those shot and killed in the attack will slowly be released publicly, a statement from the City of Orlando said. "Our city is working tirelessly to get as much information out to the families so they can begin grieving," it read. Only six names have been released so far but in all cases, according to authorities, their next of kin have been notified. At around 3 p.m. the first four individuals named were Edward Sotomayor Jr., Stanley Almodovar III, Luis Omar Ocasio-Capo, and Juan Ramon Guerrero. It was updated around 4:30 p.m., adding Eric Ivan Oritz-Rivera and Peter O. Gonzalez-Cruz to the list of dead.

It is pretty evident that the shooter (who I am not going to name but you can find out more about here) targeted the popular club because of its ties to the LGBTQ community. The fact that the mass shooting happened during Pride Month is particularly poignant for lesbian, gay, bi-sexual, transgender, and queer individuals and allies.

President Barack Obama addressed the shooting in a press conference Sunday, calling it a "horrific massacre of dozens of innocent people." He went on to assure the nation that the administration was standing with the people of Orlando and that FBI and local law enforcement agencies were investigating the attack as an act of terror. "This is an especially heartbreaking day for all our friends–our fellow Americans–who are lesbian, gay, bisexual or transgender," he continued.

By targeting a gay nightclub, the gunman was hoping to attack a specific group of people–those who are LGBTQ and their friends. This shooting was directly motivated by homophobia and hate. President Obama pointed out in his speech that gay bars and nightclubs are more than just a place to go, dance, and have a good time with friends. They are symbols, a place–oftentimes the only place–where someone can be themselves surrounded by people who accept everyone for who they are. As Obama told reporters,

The shooter targeted a nightclub where people came together to be with friends, to dance and to sing, and to live. The place where they were attacked is more than a nightclub -- it is a place of solidarity and empowerment where people have come together to raise awareness, to speak their minds, and to advocate for their civil rights.

An attack on what is actually one of the most freedom-loving places in America is an attack on what we want America to stand for. "This is a sobering reminder that attacks on any American–regardless of race, ethnicity, religion or sexual orientation–is an attack [...] on the fundamental values of equality and dignity that define us as a country," Obama asserted.

Mourners gathered for a vigil at the iconic Stonewall Inn gay bar in New York City to show solidarity with Orlando’s LBTQ community. In the summer of 1969, the Inn became a national symbol of gay rights after riots broke out as patrons fought back against a "Public Morals" police raid. Raids were common for Stonewall-regulars. Officers lined up customers, checked their identification and verify their sex, and if any of them were dressed like the "wrong" gender, they were arrested (and, often, roughed up). On June 28, 1969, the patrons finally stood up against these acts of injustice and ever since then, the popular Greenwich Village bar has been ground zero for the LGBTQ rights movement.

Crowds of all ages, races, and sexual orientations are lining the streets outside the Manhattan landmark to not only honor the victims of the massacre but to also reinforce their support of the LGBTQ community and their causes.

"It's not coincidence that the deadliest shooting in U.S. history occurred during LGBTQ pride season," Sara David, managing editor of Complex, wrote on Sunday. David points out that while for most people, including herself, Pride means "celebrating with our chosen family" and "feeling free to love and be loved," the first steps towards this kind of LGBTQ Pride came in the form of a week-long riot outside Stonewall Inn. During Pride Month in 1973, an arsonist set fire to the Upstairs Lounge in New Orleans, killing 32 people in what was the largest mass murder of LGBTQ individuals in the United States, until Sunday.

While things may seem to be better for the LGBTQ community since then, what David finds the most worrisome are "the things that have stayed the same." Even though the U.S. Supreme Court ruled on the side of "Love Wins" and made same-sex legal, there is still a long way to go. If the outdated police procedures at Stonewall in the 1960s sound familiar, says David, it's because they are basically the same as the so-called "bathroom bills" of today. Sunday's mass shooting recalls the Upstairs Lounge fire from the 1970s.

What can we do? First off, the media and politicians can choose to focus not only on the gunman's religion–he was a radical Muslim who allegedly pledged loyalty to Islamic Extremist group ISIS before the shooting–and more on the victims of the tragedy. We should examine why his hatred was directed not at all of the Western world, as many terrorist attacks are, but at the LGBTQ community and whether homophobic rhetoric heard in the United States played a role.

And, we should never forget that these victims lost their lives because somebody took them. Somebody filled with hatred. Somebody who does not represent what many want America to stand for: acceptance and kindness.