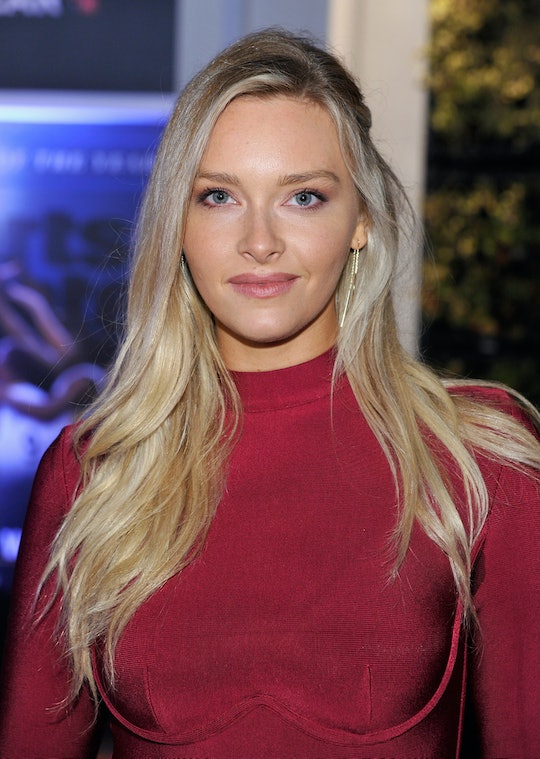 When Rob Gronkowski takes the field at Super Bowl LIII on Feb. 3, he’s going to have one fan cheering him on whether the New England Patriots win or not. After the clip of Gronkowski dancing at the Super Bowl opening night event on Jan. 28 went viral, his girlfriend took to Twitter to support the "Dancing Gronk" getting down. This led some Patriots fans to wonder, who is Rob Gronkowski’s girlfriend?

Camille Kostek is a Sports Illustrated swimsuit model, but more importantly, she has a sense of humor when it comes to the world obsessing over her football star boyfriend. When one Twitter user wrote, "And in a shocking turn of events, all of the women in New England just got pregnant," she retweeted and responded with, "Not pregnant, but we can keep practicing." So she’s not like a regular girlfriend — she’s a cool girlfriend.

When Kostek isn't supporting her dancing Super Bowl-bound boyfriend, she’s busy with her own career as a model and actress. To be fair, her only movie credit is 2018’s I Feel Pretty, but as a recently signed Sports Illustrated swimsuit model, that could change as she continues to find success in her career.

As a model, Kostek has faced a lot of criticism and rejection in her career so far and took to Instagram to write about it and urge others to keep following their dreams, despite naysayers. "So much rejection led me here, so many critics on my body, so many reasons to doubt but the will to keep going got me to this moment," she wrote in the caption of a video at her swimsuit shoot. "The feeling of forgetting things that constantly worry you, the feeling of forgetting the day and time, that euphoric feeling that takes over your body is a feeling I hope you all experience because it makes life feel so good and REAL."

She added that she hoped others could learn from her example and open their minds to "endless possibilities that the world has to offer." Although her career is a big part of her life, as the girlfriend of the Patriots tight end, football has also remained important to Kostek and she often posts Instagram videos of herself and Gronkowski at home or selfies cheering him on at his games.

It makes sense since she was actually once a Patriots cheerleader. However, she told FOX News, they never really crossed paths until after she left the team. "I always knew who he was before I was even a cheerleader. I knew who he was on the roster. I just never paid any mind. Once I resigned is when we finally met," she said. Instead of some high school-esque love story of the jock and the cheerleader, their romance began after Kostek left the sports arena.

It took Kostek retiring from the cheer team in 2015 to finally connect with Gronkowski and since then, their romance and her career have both continued to blossom. If her tweet about "practicing" making babies is any indication of what their future holds, they might even have some Baby Gronks dancing around in the near future.

When they aren't commenting on each others social media posts to cheer the other one on, they’re taking selfies and generally enjoying life together. And although Kostek isn't officially a Patriots cheerleader anymore, I’m sure she will be his biggest supporter in the crowds on Super Bowl Sunday.