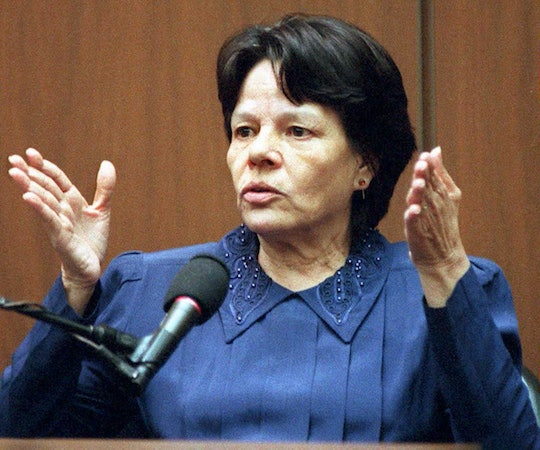 Who Is Rosa Lopez? The O.J. Simpson Trial Witness Was Certainly A Character

No one knew what to expect when Rosa Lopez walked into the courtroom. Small, unsmiling. Apparently full of important information but just as apparently not terribly happy about having to divulge it. In a case like O.J. Simpson's, currently being depicted in the FX series, The People v. O.J. Simpson: American Crime Story, she might have been overlooked. But when it came to light that she had important information that could help along the murder trial of legendary NFL superstar Simpson, who had been accused of murdering his ex-wife Nicole and her friend Ron Goldman, everything changed. So who exactly is Rosa Lopez, and what information was she bringing to the case?

Lopez, a Salvadoran maid working for one of Simpson's neighbors, reportedly had testimony of huge significance to offer for the defense. She had originally claimed to defense investigator Bill Pavelic that she had seen Simpson's famous white Ford Bronco parked outside his home some time after 10 p.m. on June 12, 1994, right around the time the coroner said the murders had occurred. This testimony would have handily threw out the assertion made by the defense team that Simpson had been hitting golf balls in his front yard and napping at the time of the murder.

It must have been a terrifying prospect for Lopez to be testifying in one of the most high profile cases of the century. But if it was, she certainly didn't show it. Under the cross-examination of Deputy District Attorney Christopher Darden, Lopez was described by David Margolick of the New York Times as "sullen and subdued. Sometimes she was downright belligerent, other times funny."

According to Margolick, Darden criticized Lopez at one point during the trial for not knowing how long she had met with defense attorney Johnnie Cochran. "You're not very time conscious, correct?" he said, to which Lopez replied,

Yes. I'm conscious about the time that I waste here.

Lopez was a difficult witness. She frequently changed her story, at times telling the court she had met with Cochrane (who she referred to as "Mr. Johnnie") and then saying she hadn't met with him at all. When Darden insinuated she had been offered $5,000 for her testimony, she burst out laughing and let it be known that, if she had been offered a bribe, she would have taken the money and run.

It wasn't until Superior Court Judge Lance Ito decided to postpone the trial to give the prosecution time to prepare cross-examination that the formidable Lopez finally cracked under pressure. Wrote Jessica Seigel of the Chicago Tribune, who was in the courtroom at the time,

Lopez was distraught over the delay. "It's not my fault that I worked next to Mr. Simpson. It's not my fault what I saw and heard," she told Ito, then burst into tears. "I'm very sick, sir. I can't eat during the day, sir. I'm not sleeping very well."

According to Seigel, Lopez then simply turned and walked from the podium after announcing: "I'm very tired. I want to go rest, sir. I don't want any more questions."

Not much is known about Rosa Lopez these days. Unlike the rest of the key players, the rich lawyers, ex-girlfriends, and even good old Kato Kaelin, Lopez didn't have the luxury of capitalizing on her noteriety. She was able to fade back into the world from whence she came, I suppose. Regardless, it sounds like Lopez should make for an interesting character on The People Vs. O.J. Simpson: American Crime Story on FX. And that's really all that matters.