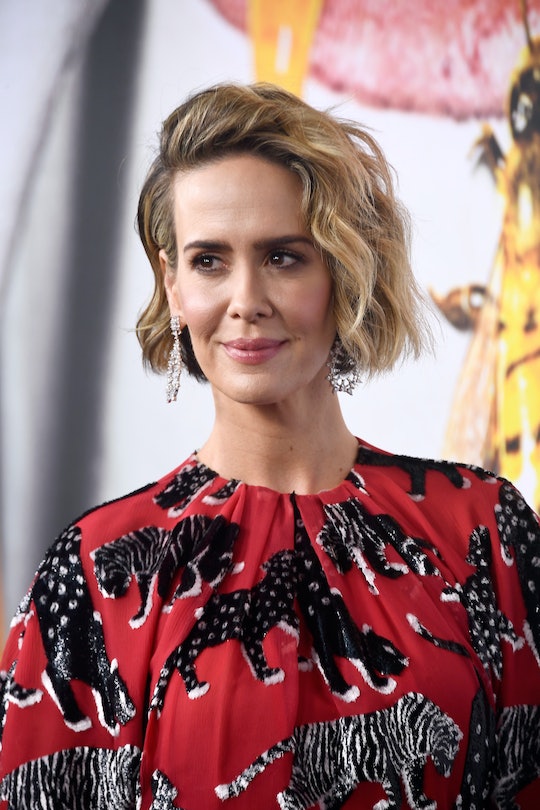 Sarah Paulson Is Taking On More Than One Character On 'AHS: Apocalypse'

It wouldn't be the Halloween season without American Horror Story and it wouldn't be AHS without returning stars like Sarah Paulson at the forefront. After the promos were released for Season 8, though, fans were likely wondering who Sarah Paulson is playing on American Horror Story: Apocalypse and how she fits in with the storyline. As with anything related to AHS, the answer isn't as clear cut as you might think. In fact, Paulson is playing more than one character this season. According to Vulture, she’ll be playing Cordelia Good, her Coven character, Billie Dean Howard from Murder House, and Ms. Wilhemina Venable, an entirely new character.

In a promo ahead of the Season 8 trailer, Paulson’s AHS: Apocalypse character is shown walking up to a raffle drum. Before she picks out one of the pieces of paper inside, she tells the camera, "Now is your chance to be one of the few remaining. This is your chance to survive. We’ll find you soon." Compared to most of Paulson’s other characters in the franchise, Wilhemina definitely seems like a much more mysterious and menacing character. And given Season 8’s end of the world theme, she could be part of the baddies this season.

When Ryan Murphy spoke about AHS: Apocalypse at a For Your Consideration event in April, he teased a season that will take place in the not so distant future. He said that Season 8 would be about a post-apocalyptic society set "18 months from today," which was on April 6. This means that fans won't be seeing some kind of dystopian society, per se, but instead just a different world than we know now.

In the AHS Season 8 trailer, Paulson’s character is in almost every scene. Apparently this post-apocalyptic society also has an underground bunker that only a select few are chosen to to take shelter in. Wilhemina appears to be a leader of Outpost Three, where she greets guests, punishes them by whipping them, and sets ground rules that involve staying inside the bunker and abstaining from unapproved sex. But because this is AHS, I expect the latter rule to be broken rather quickly and, judging by the trailer, Wilhemina is all too happy to punish her Outpost Three residents for breaking any of her rules.

Unlike Paulson’s previous characters from the franchise, Wilhemina might be downright evil. So while Paulson portrays the medium Billie Dean and Supreme witch Cordelia, she’ll also be playing a character who seems very unlike them.

Although Paulson is making the shift from heroine to what could be villain this season, the biggest challenge for her might be playing totally different characters at once. "I shot two of the characters that I'm playing on the same day. Although they are not interacting with one another, I shot one in the morning and a different character in the evening," she told The Hollywood Reporter in a recent interview. "I had played Billie Dean Howard and Sally in the same episode in [AHS] Hotel, but we didn’t shoot that in the same day. So this is the first morning where I started as one character and ended the day on another one."

The AHS: Apocalypse trailer shows two of Paulson’s characters in the same place at the same time — Cordelia and Wilhemina at Outpost Three — but hopefully they don't have to interact in any way. Paulson will likely be able to pull off all three characters this season, even if one is someone totally new and seems to be very different from her other roles in the franchise. And personally, I think the most interesting thing is going to be watching how Paulson plays both good and evil at the same time