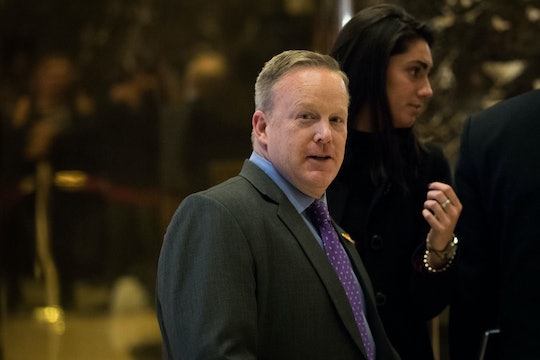 President-elect Donald Trump is ostensibly on vacation at his Mar-A-Lago retreat in Palm Beach, Florida, but it doesn't seem to stop him from getting any work done. Trump has been working towards filling his future Cabinet positions before his inauguration in January 2017. Most recently, he added members to his future White House communications team. While some of his choices might be familiar to voters, his pick for White House press secretary might raise a few eyebrows. Who exactly is Sean Spicer, you ask?

Spicer has been the Republican National Convention communications director for the past six years, which makes him the longest serving director ever to hold that position. The 45-year-old has been working for the Republican Party in the communications department in Washington for 15 years. He is considered a well-known face to the Washington press corps, a potential positive note for relations between the president-elect and the mainstream media. Trump has been rather famously combative with the press throughout the 2016 presidential election, and there have been concerns that Trump could be planning to limit media access to the White House, according to CNN. Spicer, who has been the chief strategist for the RNC since 2015, was reportedly future White House chief of staff (and former RNC chairman) Reince Priebus' top choice for press secretary.

Spicer has been a fairly regular presence within the Trump transition team since the Nov. 8 election. The two men actually have quite a bit in common; according to The Washington Post, Spicer has a reputation for being a tough competitor who values winning above all else. He said,

If the charge against me is that I fight to win and I’m intense, then I’m guilty.

Despite having spent his earlier years in the political forum extolling the benefits of free trade and preaching a softer approach to immigration (a complete about face from Trump's campaign platforms), Spicer has been fiercely loyal to Trump. Even during the Republican National Convention, when it was Spicer's responsibility to put a positive spin on future First Lady Melania Trump's speech, when she was accused of lifting the majority of her speech from First Lady Michelle Obama. Spicer's response? Change the conversation. He pointed out that the phrases were so commonplace as to be used in a children's cartoon, according to The Washington Post:

Twilight Sparkle from ‘My Little Pony’ said, ‘This is your dream. Anything you can do in your dreams, you can do now.’

And while the press corps laughed and mocked him, Spicer had managed to undermine the serious issue of plagiarizing and get people talking about My Little Pony. Which means Spicer could be uniquely qualified to be the press secretary for one of the most colorful presidents to be elected to the White House.

Sean, Hope, Jason and Dan have been key members of my team during the campaign and transition. I am excited they will be leading the team that will communicate my agenda that will Make America Great Again.

Spicer reportedly beat out Laura Ingram and Monica Crowley for the position of press secretary.

More Like This
6 Takeaways From The White House’s First-Ever Parents Press Conference
What Exactly Are Minions, Anyway ?
Megan Fox Explains Why She Asked Machine Gun Kelly If He Was Breastfed As A Baby
Family Of Grandfather Killed In Highland Park Mass Shooting Say He "Saved" Their Lives