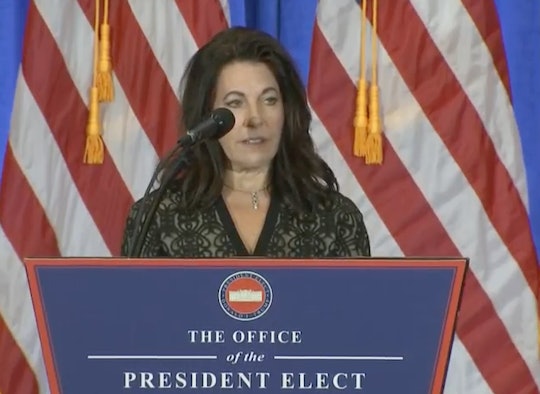 Sheri Dillon Is Going To Be Busy, Thanks To Trump

On Wednesday afternoon, just nine days away from the inauguration of the new president of the United States, President-Elect Donald Trump held a press conference. After commenting on everything from new allegations against Trump and his dealing with Russia, to his upcoming plans for boosting the United States' economy, a woman took the podium to discuss Trump's conflict of interest. Citizens viewing the press conference were left wondering, "Who is Sheri Dillon?" Trump's lawyer received significant air-time discussing Trump's multiple businesses, why he has yet to set up a blind trust, why he won't sell his holdings, and the steps he's taking to make sure he doesn't use the power of the presidency to benefit himself (and his family).

Dillon is a lawyer with Morgan Lewis, and primarily focuses on federal tax controversy matters. According to the Morgan Lewis website, Dillon, "guides clients through IRS examinations, appeals and administrative claims processes, and litigation." On Wednesday afternoon, she was also responsible for outlying Trump's plans to keep his personal business and the office of the president separate; an ongoing concern as Trump has yet to submit his tax returns (something every president in the history of the United States has done), create a blind trust (which would keep Trump from knowing anything regarding his businesses) or much else to make sure he wouldn't personally and financially benefit from sitting in the most powerful office in the country.

Dillon went in great detail (or as much as someone can during a press conference), going so far as to explain emoluments: a line form the constitution that prevents office holders form taking benefits and money from foreign leaders and businesses. Dillon went on to explain that Trump using a blind trust would be a "bad idea," as Trump would be forced to sell his naming rights. In other words, Trump's lawyer made it clear that he will never sever the Trump presidency form the family business, which will still be run by his two sons, saying, "Selling the entire Trump organization isn't even feasible."

The American people are sure to hear more from Dillon (and the rest of Trump's lawyers) in the coming years. Until then, the citizens of the Untied States can turn to her Linkedin account to learn more about her extremely impressive repertoire. Dillon was a partner at Bingham McCutchen for four years, and a partner at Vinson & Elkins for a year. In 1999 Dillon graduated from Georgetown University Law Center. There's no doubt that Dillon will continue to have her work cut out for her, as Trump is nothing if not the most unprecedented future leader of the free world.