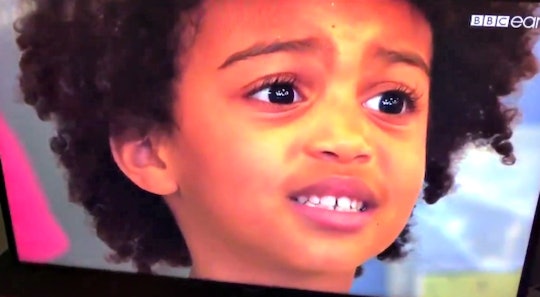 Who Is Skylar On Twitter? She Has Trouble Sharing

Sharing is important, but there are times when it's really, really hard to do. If you need proof, just watch this little girl Skylar grapple with sharing her chocolate on Twitter. Skylar was a participant on a BBC program that some genius took the liberty of recording and sharing on social media. Romper has reached out to the BBC for clarification on programming and the name of the specific show in the viral clip, and is awaiting a response.

But here's the general idea: there are five children seated in a nursery and each one opens a present at the same time, while being monitored by an adult. Every kid gets the same thing — a set of stilts — but one, Skylar, also gets a chocolate bar. Drama ensues.

She's immediately thrilled (uh, who wouldn't be?) until the other kids, along with the one adult in the room, start suggesting that Skylar share her chocolate. Skylar grimaces and is under immediate stress because she obviously wants the chocolate all to herself.

She tries to reason her way out of it instead of just saying "no" flat-out. Skylar offers, "I don't think there's enough for everybody." But an adult off-camera asks her how many breakable pieces of chocolate there are, twisting her arm a little. Another girl (who is aggressively lobbying for a piece of chocolate) takes it upon herself to count for Skylar. Turns out there are five pieces and five children. Darn!

But Skylar is still not convinced that it's imperative for her to divvy up her treat. The one little girl tells her, "we can have one each,OK?" Skylar is visibly pained. "It is mine," she pleads with the woman off-camera. But no one backs her up. The decision is Skylar's alone to make.

"I'll just eat it before it melts," Skylar reasons. That did not fly with the other kids. One other girl starts to bargain with her, explaining that if Skylar won't share her candy, the other kids won't share their things with her.

And that is a perfectly reasonable argument. But if Skylar decides that she'd rather have ALL the chocolate and miss out on whatever else the other kids might get later, who's to blame her? It's Negotiation 101. Maybe the other kids don't have things Skylar wants, right? Do you, Skylar. Make those tough choices.

She is eventually convinced (or bullied, depending on your read) to share a little bit of her candy with her two female friends. She warns one girl with her hand hovering over the package, "don't take without asking." But just as Skylar breaks off a piece and begins to share, a boy who was not even one of the original five kids rushes in and takes it all. UGH. Toddler crying ensues.

Case closed. A greedy little kid made Skylar's decision for her. People on Twitter are all rallying around Skylar and her beautiful inability to hide all of her feels from showing on her face. Others noticed the racial and gender dynamics at play. Skylar is the one black girl in a group of mostly white children. And it was a white boy who took her chocolate. There are some grownup levels to Skylar's situation that she, at her young age, probably doesn't realize are at play. Although now she knows. Thanks a lot, BBC.

Teaching kids to share means dealing with some major issues, ones many families will probably grapple with over the holiday as the tiniest family members try to figure out how long is too long to let a distant cousin play with their new toys.

It's up to every parent to decide for themselves how to work those power-dynamics out in the living room, but one thing is definitely clear from the viral video: little kids know what's up even if they don't really know what's up.

Our consensus? That chocolate was Skylar's and she should be able to decide what's worth sharing, with who, and what protocol should be taken when divvying it up. Remember, she wisely remarked, "don't just take without asking."

At the end of the day, she wasn't the greedy one. Let's hope Skylar doesn't have to share her chocolate with anyone over the holiday.

More Like This
Yes, Your Young Children Belong At Abortion Rallies
Operation Fly Formula Begins With 78,000 Pounds Of Baby Formula
What Is Monkeypox & Should You Be Worried? Here’s What You Need To Know
Chris Pratt & Katherine Schwarzenegger Welcomed A Baby Girl With The Prettiest Name