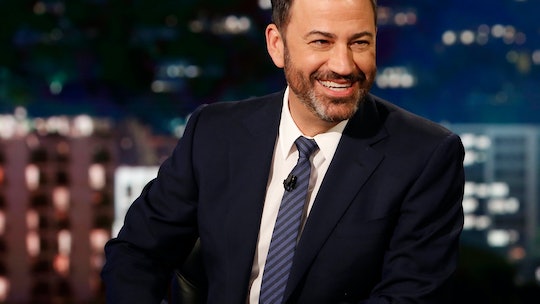 Hold on tight, because this one is going to be epic. On May 22, Jimmy Kimmel is bringing back two classic sitcoms with Live in Front of a Studio Audience: Norman Lear's 'All in the Family' and 'The Jeffersons'. As the title suggests, the live special will recreate original episodes from the 1970s shows. But seeing as we're now in 2019, the 90-minute event will feature an entirely new cast. So who is starring in 'All in the Family' and 'The Jeffersons' Live? As it turns out, Kimmel and Lear took on a number of modern-day comedy powerhouses for one legendary night of television.

Although longtime fans of All in the Family and The Jeffersons won't get to see stars like Sherman Hemsley and Carroll O'Connor reprise their roles on the new special, you can rest assured that the characters are in good hands. Per The Hollywood Reporter, The Jeffersons reboot cast includes Jamie Foxx (Ray) as George Jefferson, Wanda Sykes (Black-ish) as Louise Jefferson, Justina Machado (Jane the Virgin) as Florence Johnston, Will Ferrell (Anchorman) as Tom Willis, Kerry Washington (Scandal) as Helen Willis, Jovan Adepo (Tom Clancy's Jack Ryan) as Lionel Jefferson, Amber Stevens West (Greek) as Jenny Willis, Stephen Tobolowsky (One Day at a Time) as Harry Bentley, and Jackée Harry (Sister, Sister) as Diane Stockwell.

In the teaser trailer for 'All in the Family' and 'The Jeffersons' Live, Kimmel revealed how the show came together.

"I was talking to my friend, Justin Theroux about All in the Family, what a great show it is, and how groundbreaking the show was," Kimmel said. "I thought, 'You know what? They do these live musicals on television. Why not take a television show and put it on television and do it live?' I called Norman Lear and he thought it was a great idea and here we are."

Later, Kimmel spoke up about putting together the show's cast.

"I think the first person Norman Lear mentioned was Woody Harrelson," Kimmel said. "I thought that was such an interesting choice and he said yes immediately."

Kimmel then asked Foxx to play George. When the actor gave Kimmel the green light, the host realized he really "had something."

"It really is crazy when you have something great, how quickly people will agree to be apart of it," Kimmel said.

The 'All in the Family' and 'The Jeffersons' Live special may feature a new headlining cast, but that will be the only noticeable change in the reboot. According to Entertainment Weekly, not only were the sets and costumes recreated to look exactly like the originals, but the script for the 2019 live show has not been altered.

“These two scripts will be done word for word. We’re not updating anything. The lesson in that is human nature doesn’t change," Lear told the publication.

As of now, ABC has yet to reveal which episodes of All in the Family and The Jeffersons will be featured in the live show. However, the writer promises that the topics brought up in the show will still be relevant.

“All of the problems that Archie and the Jeffersons face are clearly here today," Lear explained. "Nothing has been totally resolved. There isn’t any subject we did through all those years that we couldn’t do again today.”

In an interview with USA Today, Kimmel explained that he hopes the special will reintroduce comedies that open discussions about serious and controversial issues.

“For me, the inspiration is the work of Norman Lear and the great television shows that I want to make sure are not forgotten by a new generation," Kimmel said. “They’re important shows, just as important as anything in our culture. I think television is seen as less than that sometimes, but to me and my family, these are shows we love and learned from.”

No matter how you look at it, the 'All in the Family' and 'The Jeffersons' Live special is destined to be a hit. From the star-studded cast to the timeless writing, this will be 90-minutes of unprecedented television. So be there or be square.

Live in Front of a Studio Audience: Norman Lear's 'All in the Family' and 'The Jeffersons' will air May 22 on ABC.