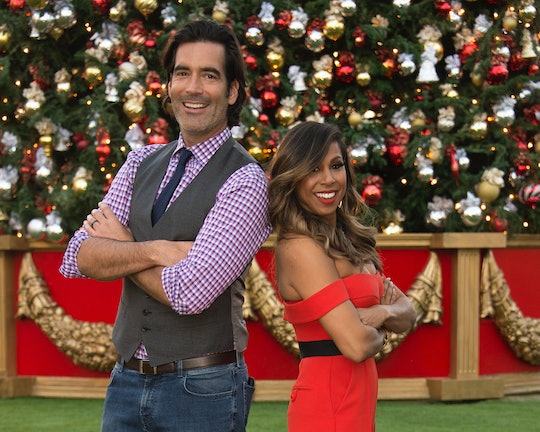 If there's a fun holiday tradition, then chances are, someone has made a reality TV show about it — be it baking, decorating, or anything else. Food Network might have Holiday Baking Championship, but for the past six years, ABC has been home to The Great Christmas Light Fight and Monday night, the network airs the All Stars special. But who is starring in The Great Christmas Light Fight All Stars? The episode features the best Christmas light displays from competitors from the past five seasons of the show to take you down memory lane.

The families themselves haven't been announced and it’s unclear if they are returning families who have won the coveted $50,000 prize in the past or if they're just overachievers who will make you wish you had more outside decor than that inflatable Santa Claus. Either way, the same hosts will return to guide you along in the special. Taniya Nayak and Carter Oosterhouse, who have hosted the other episodes in past seasons, will also host the All Stars special as viewers look back on some of the most memorable homes and light displays.

The hosts typically travel around the country visiting different homes to award prizes for the most creative Christmas light displays and every episode one family is awarded $50,000. If there aren't any monetary prizes for the All Stars episode, it will still be nice to look back on some of the memorable displays.

In addition to the special All Stars episode this season, viewers have been given a look inside the homes for the first time. Not only have you gotten to see the miles of string lights decorating the outside, but there have also been homes where it’s looked like Christmas threw up inside. I usually overdo it on any given holiday myself, but the insides of some of these homes are somehow more festive and extravagant than the outside. It’s hard to say if the hosts will revisit the featured homes in the All Stars episode again to see their interior decorations too, but it opens the door — literally — to that possibility.

Viewers have already seen some impressive decorations in the Heavyweights episode this season where there were literally millions of lights on display at some of the competing homes and businesses, so this seems like a season of game changing content for The Great Christmas Light Fight. Luckily, it’s already been confirmed that The Great Christmas Light Fight Heavyweights addition will return in 2019 for Season 7. I could see more All Stars focus in the seasons to come too, especially since there have already been so many memorable homes and businesses featured on the show.

The contestants on The Great Christmas Light Fight are chosen from the millions of videos sent in every year. The contestants who might show up for the All Stars episode are likely from the pool of memorable and impressive holiday decorators who just happened to channel Clark Griswold in the best way possible. If this becomes a thing for future seasons, I wouldn't hate the idea of the "all star" former contestants getting new prizes after going up against each other. Kind of like the best of the best.

Of course to really do it right they might have to save All Stars episodes for once every few seasons, but if Monday’s episode of The Great Christmas Light Fight proves to be as exciting as the rest, then it could happen. After a season of more lights than my electric bill can handle, the first ever All Stars episode airs Monday night on ABC at 8 p.m. ET.