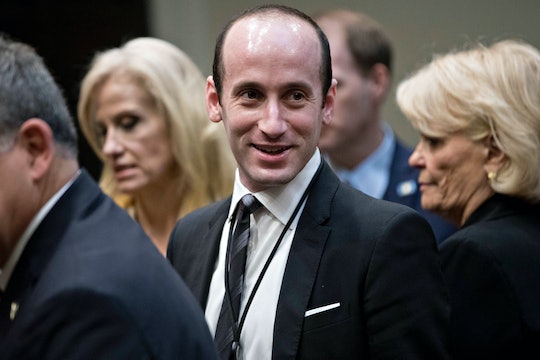 Who Is Stephen Miller? His Past Is Controversial

Stephen Miller has been an industrious bee behind the scenes of the Trump administration in recent weeks. As President Trump continues to defend his controversial temporary travel ban on seven Muslim-majority countries, his top aides have come under fire for rushing the monumental order. As news continues to filter from sources in the White House, a new name has been bandied about as one of the masterminds behind the ban: Stephen Miller. If you're wondering who Stephen Miller is, you're certainly not the only one. The 31-year-old was reportedly a serious driving force orchestrating the ban, and he allegedly has a long history of alleged Islamaphobia. Romper reached out to the White House for comment and is awaiting a response.

According to CNN, 31-year-old Miller made his mark as a radical back in his college days at Duke University. During his senior year, White House senior policy adviser Miller reportedly launched an initiative meant to educate people on the dangers of "Islamafascism" called the "Terrorism Awareness Project." He was national campus coordinator, president, and co-founder of the initiative that was launched in partnership with the David Horowitz Freedom Center, whose mission reads in part:

The David Horowitz Freedom Center combats the efforts of the radical left and its Islamist allies to destroy American values and disarm this country as it attempts to defend itself in a time of terror.

Miller's history of alleged Islamaphobia goes back even further than his college days at Duke; when he was still just a high school student in Santa Monica, Miller reportedly wrote a column for his high school newspaper called" A Time To Kill," where he actively encouraged violent response to radical terrorists, according to a report by The Telegraph.

We have all heard about how peaceful and benign the Islamic religion is, but no matter how many times you say that, it cannot change the fact that millions of radical Muslims would celebrate your death for the simple reason that you are Christian, Jewish or American.

During his time at Duke University, Miller reportedly wrote a twice-monthly column covering an array of topics including the gender pay gap (he argued that paying men and women equally would ultimately hurt small businesses, since women take time off to have babies, according to The Telegraph). His writing was noticed on a national level by white supremacist and fellow Duke alumni Richard Spencer. While Miller has since condemned Spencer and said that his views have "matured" since college, Spencer claimed to have been a mentor to Miller, according to The Telegraph.

These days, Miller has time for one man only: President Donald Trump. In the last week, Miller has been doing the rounds of talk shows vehemently defending not only Trump's travel ban but also his supreme right to make decisions "without question." During an interview with Face The Nation, Miller said about the travel ban:

Our opponents, the media, and the whole world will soon see as we begin to take further actions that the powers of our president to protect our country are very substantial and will not be questioned.

It's unclear what is more disturbing — that someone with an open, documented history of what many have described as Islamaphobia is working as a chief adviser to the President of the United States, or that this same adviser does not believe Americans have the power to question their president's actions.