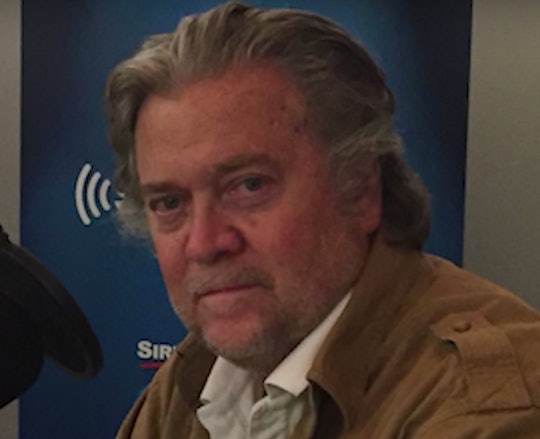 Republican presidential candidate Donald Trump is a notorious, outspoken critic of what he's dubbed the "dishonest" mainstream media. But there's one outlet that's consistently praised the real estate mogul — and now the head of that organization, Breitbart News, is joining Trump's campaign as its chief executive officer. Call it a major conflict of interest, call it the ultimate Hail Mary of a failing campaign, but this move is a key part of a restructuring of Trump's inner circle of advisers of strategists, and and it has election spectators and commentators talking about who Steve Bannon is and what he brings to the Trump cause.

Much to his dismay, Trump's essential "Trump-ness" is costing him in the polls — a lot. He's already announced that he believes that November's general election will be "rigged" in favor of his opponent, Democrat and former Secretary of State Hillary Clinton, ostensibly as a preemptive fortification against his potential defeat. But the addition of Bannon, executive chairman of the right-wing populist website Breitbart News, to his team shows that he has no intention of abandoning the bombastic persona, inflammatory rhetoric, or showmanship that buoyed him through the primaries. In fact, Reuters reported that Bannon is expected to reinstate the campaign practice of letting Trump simply be Trump.

Campaign manager Paul Manafort, by contrast, has attempted to professionalize the candidate and his messaging. Manafort, whose clout in the campaign will diminish as the result of the changes that also saw the promotion of senior adviser Kellyanne Conway to campaign manager.

It no surprise, of course, that Bannon would be a proponent of not trying to make Trump into someone he's not. The former Navy officer and Goldman Sachs investment banker has been involved with Breitbart since its 2007 inception, according to CNN, and the outlet continues to publish pro-Trump content. The headline of the top story on the site right now, for example, is "Trump on the Move: His Two Strongest Speeches of the Campaign."

The relationship between the candidate and the site seemed so cozy, in fact, that BuzzFeed News reported last year that unnamed Breitbart staffers believed that Trump was actually paying for the positive coverage. Although he praised Trump as "a savvy and successful businessman," Bannon called the idea that there was a financial relationship between his publication and Trump a "lie."

And Bannon has demonstrated his allegiance to Trump as well. In March, Bretibart reporter Michelle Fields claimed that now-former Trump campaign manager Corey Lewnadowski grabbed her roughly at a Trump event. She eventually resigned from her position after the media outlet refused to support her, even though video evidence seemed to corroborate her story.

Upon learning of Bannon's appointment, Lewandowski himself characterized his style as that of a "street fighter, a person who is willing to go right at his opponents," even though Bannon has never before run a political campaign.

What he has done is host a Breitbart-branded radio show (now, he's taken a leave of absence from Breitbart and plans to return immediately after the election), and produce a number of conservative documentaries. Among the most notable is "Clinton Cash," which purports to expose that the Clintons have major conflicts of interest in how they make their money, like accepting money from large donors and foreign governments, according to an October 2015 Bloomberg News profile of Bannon that pegs him as "the most dangerous political operative in America," because of the way he uses the media to advance his conservative agenda.

One former Breitbart staffer agreed that Bannon is an effective political operative, telling Politico's Hadas Gold that he's a "genius." The unnamed source didn't mean it as a compliment, though. "He’s also extremely malicious and vindictive. He has an incredibly short temper and an even shorter attention span," they added. "A megalomaniac."

Whatever Bannon's true character, it's clear that he's pulling for a Trump victory, and that the Trump train believes that he can help to make that happen. Whether that's true is yet to be seen, but the fact that Bannon reportedly intends to "let Trump be Trump" is a clear indication that both will dominate headlines until November, and possibly beyond.