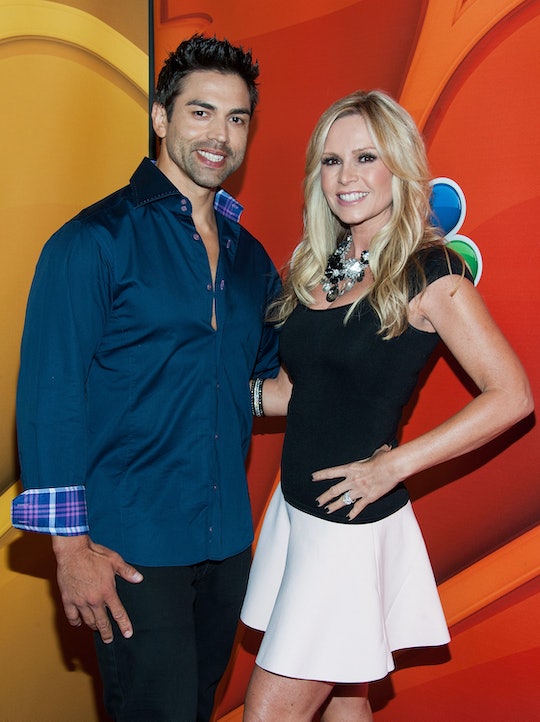 Tamra Judge's Husband On 'RHOC' Has Had Some Heath Scares

Tamra Judge’s husband, Eddie Judge, is a pretty regular character on her show, Real Housewives of Orange County, and as of late, his health problems have been a big part of Tamra’s life. So naturally, fans have began to wonder: who is Tamra Judge’s husband Eddie on RHOC? In early 2018, Eddie was diagnosed with atrial fibrillation, which means that he has an irregular and rapid heart rate, or arrhythmia. This year alone, he underwent six different procedures to correct the heart condition.

Earlier in the year, Tamra posted an Instagram story that let fans know he’d already had three different procedures to help with the irregular heartbeat and was, at the time, able to get back into his workout routine. Which is probably important since Tamra and Eddie make part of their living with their own gym, CUT Fitness. Their website explains that through small group sessions, Tamra and Eddie work to mix "unique cardio and strength training to motivate, push, and challenge athletes of all levels." They also create unique meal plans for different clients to see them through on their fitness journeys, so it's kind of a big deal for the couple.

Although Eddie has had multiple procedures since his diagnosis this year, Tamra told The Daily Dish in July that some days are better than others. "He's had a total of five heart procedures and he's still not doing great. And he's just taking it day by day," she revealed at the time. "We don't know what his outcome's going to be. He has a doctor's appointment next week to find out what the next step is."

She explained that in one procedure, the doctors has to go into his heart to cauterize 71 different places on top of the surgeries that were to come after that. "But now he's in the healing process and that sent him into what's called a flutter and his heart is just uncontrollable."

In September, Eddie underwent his sixth procedure and posted a photo on Instagram with the caption that included, "I can’t wait to be back on my bike living my blessed life again. Since then, he seems to have been back at his normal physical activity and posted a video of himself riding a dirt bike in October, so he seems to be on the road to a full recovery.

According to Eddie’s LinkedIn profile, he worked at The Judge Law Firm, ALC for 11 years before starting the gym with Tamra and that he’s been active in a variety of sports since high school. It’s probably concerning that he may have had to slow down a bit following his diagnosis, but after several surgeries, he seems determined to keep his spirits up with physical activity. So regardless of his heart problems, he’s likely more determined than anyone to continue his life’s work. And as viewers have seen on RHOC, Tamra has been encouraging and supportive.

Unlike some of the other established couples on shows on the Real Housewives franchise, fans got to see Eddie and Tamra in the early days of their relationship and even witnessed his proposal on the show. Their love story unfolded over the past few seasons and now that they’ve started a business together and have gone through something as life-changing as Eddie’s string of surgeries, it seems like there's nothing the two of them can't tackle together.