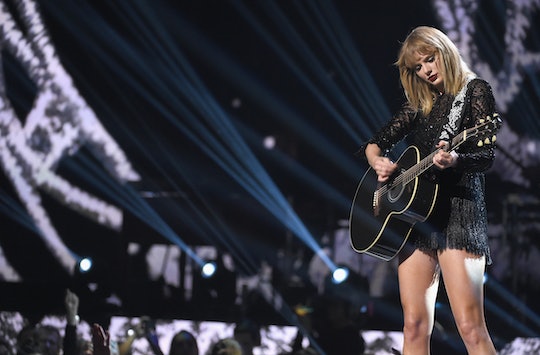 In the middle of a football game Saturday night, Taylor Swift decided to keep her hot trail burning by releasing a new song, "Ready For It." But, like her latest single, "Look What You Made Me Do," the new hit is already causing fans to speculate. Who is Taylor Swift's "Ready For It" about, and why did she write it?

Like the lead up to "Look What You Made Me Do," fans were kind of surprised by this new hit. OK, so maybe the clearing of her social media and all the snake Instagram posts gave you some inkling that there was a new T. Swift song about to hit, but "Ready For It" previewed out of the blue in the middle of the Florida State versus Alabama football game Saturday night. But one thing that isn't out of the ordinary? The way fans immediately began dissecting the lyrics to figure out who exactly the song is about. After all, Swift has pretty much built her brand on the idea that all of her songs are stories and actually have a connection to another human being. So who is "Ready For It" about?

While the full song isn't available yet, the snippet fans heard was enough to leave them analyzing. According to Just Jared, one minute of the song was played during ABC promos, and the lyrics definitely sound like they're talking about a romance. The beginning starts off with "Are you ready for it? Baby, let the games begin," but the chorus is what really has fans curious.

I-I see how this is gonna go

Touch me and you'll never be alone

No one has to know

In the middle of the night in my dreams (my dreams)

You should see the things we do (we do), baby (baby, mmm)

In the middle of the night in my dreams (my dreams)

I know I’m gonna be with you

So, I'll take my time

In the middle of the night

I mean — come on. Swift may be good at hints, but this one reads pretty obvious, right? A secret romance is the guess of most fans, especially with all the references to "the middle of the night" and "let the games begin." And no one has to know? This is basically describing every quiet, secretive romance shared only through letters that literature has to give.

But who is it exactly? Well, guys — it's not really a secret romance if we know, is it?

I'm not a huge Swiftie conspiracy theorist, but I even think fans are stretching to name who this song is about. Is it Ed Sheeran? Is it some mystery person we've never seen Swift before? Is it . . . OMG, is it the old Taylor? (RIP.)

Honestly, her fans don't even seem to be worried about who the song is yet. Instead, they're totally blown away by how Swift pulled one over on them (in the middle of a football game, no less) and how they're more than ready to hear the full track. But still, it becomes curiouser and curiouser.

Honestly, with only one minute of the song available and literally no hints from Swift herself (unlike the snakes she shared before), I think it's safe to assume nobody knows who this song is about yet. But, if the world knows anything about its girl Taylor, it's that the song is always about someone. We'll probably find out soon enough . . . when we're ready for it. (Yeah. I went there.)