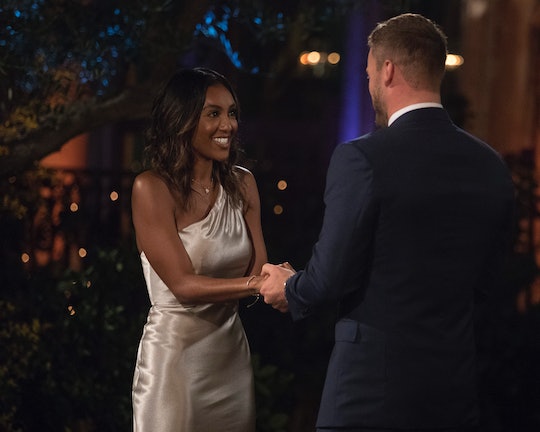 Tayshia Was Married Once Before 'The Bachelor'

There comes a time in every season of The Bachelor when the lead gets down to the nitty gritty with his contestants in order to get closer to them on a more emotional level. Monday night, Tayshia got her first one-on-one date with Colton and did just that. And instead of worrying him that she may not be ready for a new relationship, Colton appreciated Tayshia opening up about her former marriage. But who is Tayshia's ex-husband? The Bachelor contestant might be a frontrunner after that nearly perfect one-on-one.

Tayshia explained during their date that her ex-husband was her first boyfriend and someone she was with for six years before they split in the past year. I'd say that's a lot of pressure for Colton, but thanks to the whole virginity thing, I guess there's enough pressure to go around, so it evens out.

According to court documents obtained by Radar Online, Tayshia was married to a man named Joshua Bourelle for just one year and six months after citing irreconcilable differences for their divorce. Their divorce was finalized in April of 2018, about five months before filming for Colton's season of The Bachelor began.

Unfortunately, it looks like Tayshia's Instagram has been scrubbed of her ex, so there aren't any photos to give Bachelor fans a clearer image of the man who came before Colton. She did, however, shed some light on her former marriage and what it's taught her about future relationships.

Although Tayshia doesn't seem to be BFFs with her ex-husband, it does look like things ended relatively amicably since the court documents said they each left the marriage with their own possessions, money, and individual debts. And, Tayshia told Colton on The Bachelor, she's grown from the experience.

"Being a Christian woman, you think you get married once and that's gonna be it and you expect that from your partner as well," she said. "But you can't make some wanna be married."

She added that going though her divorce has made her the strong person she is today and it's what helped her gain the strength to go on The Bachelor and experience her first one-on-one date with Colton. "I've learned that when i do get married again, I'm gonna make sure it's amazing," she said. Hint hint, Colton.

Although Tayshia's marriage is in the past, the big reveal could bring up problems with Colton later on down the season. In other seasons, whenever contestants reveal past serious relationships or failed marriages, the Bachelor or Bachelorette in question ends up having little doubts about those contestants. I can see a pensive looking Colton staring off in the distance from a balcony while he ponders all of life's wonders and considers if Tayshia is ready for another engagement not even a year after her first marriage ended.

It's totally up to Tayshia to decide if she is ready to move on and get engaged again, but Colton is bound to have his own personal doubts before the season is over.

Thanks to Tayshia's openness about her marriage, she's definitely on the road to hometowns on The Bachelor. I don't know if she and Colton will last beyond that or if ABC will drudge up her past like they did with Becca on Arie's season of The Bachelor, but right now, Tayshia is on the right track. Regardless of how painful a past might be, contestants have proven time and again that it pays to be honest and open on The Bachelor.

Hopefully, Tayshia and Colton continue to have successful one-on-one dates as the season goes on because I'm already rooting for her.