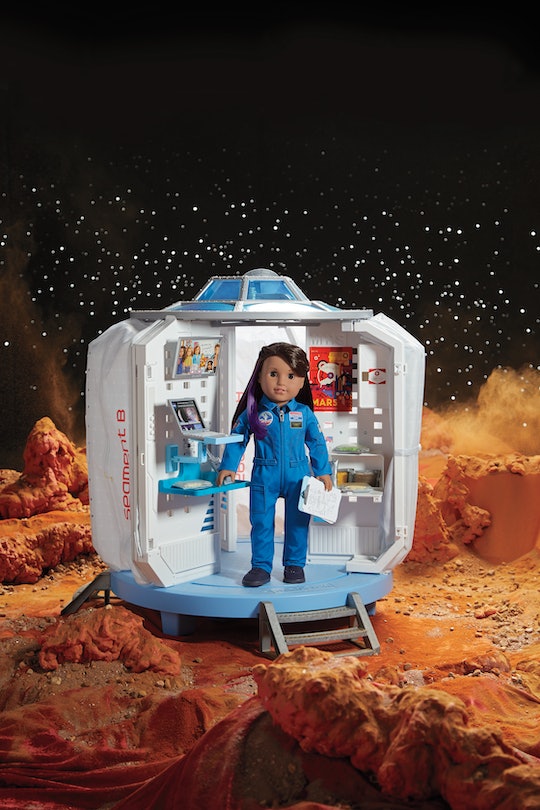 No matter your age, you've had a relationship with an American Girl doll. Whether Josefina was your pal when you were in grade school or you are like me and called Samantha Parkington "yours" for your younger brother who was too shy to admit he adored braiding her hair, an AG doll has made an appearance in your life. You might even be the parent who awaits news, wondering, who is the 2018 American Girl doll of the year, just as eagerly as your little one.

Ah, well, if that's the case, you can plan to be thrilled this year: Today American Girl announced their girl of the year is Luciana Vega, an 11-year-old "aspiring astronaut who dreams of being the first person to go to Mars," the doll makers said in a statement unveiling the new character, according to ABC News.

She is the first character that's "really immersed in STEM," Rebecca Dekuiper, a designer at American Girl said, according to AL.com. "We've had STEM products before, but we really wanted to do a whole character to show girls that STEM is cool."

The company announced the doll today, but the official release — like, the one where you can purchase your own — will take place in stores, online and through American Girl's catalog on Jan. 1. There's even a countdown on the site to help you get (more) excited.

"One of the things that American Girl has championed for well over 30 years now is that every girl has the power to change the world — we want every girl to know that she has that inherent power," Julie Parks, American Girl Spokesperson, tells Romper in a phone interview, adding that the message is the inspiration behind the company's #charactercounts campaign. "Part of that comes from learning about who they are and what kind of person they want to be, especially when faced with trouble or setbacks. For us at at American Girl, it's about helping girls develop their strength in character."

Luciana's release comes on the heels of last year's doll, Gabriela McBride, a dancer, artist, and poet who was "out to inspire change," according to the site. Like Gabriela, Luciana — who has a bright purple streak through her hair — will come with a full product line, including STEM-inspired outfits and accessories, like a space suit and "Mars Habitat loaded with science and research essentials for hours of pretend play," the news release noted.

Even more exciting? For the first time, your kiddos can interact with Luciana's world by downloading the American Girl app and scanning her catalogue pages to unlock exclusive content, including trailers and videos, space simulations, and quizzes and challenges. Like most of the American Dolls, kids can learn about Luciana's story in accompanying chapter books.

American Girl said they worked with a skilled advisory board to create Luciana, including Dr. Ellen Stofan, a former NASA chief scientist and Dr. Deborah Barnhart, CEO and executive director of the U.S. Space & Rocket Center. The company also partnered with Scholastic, NASA, and Space Camp to create Blast Off to Discovery, an educational program to help third though fifth-grade students explore the wonder of space through Luciana-inspired content, including free STEM-based lesson plans and classroom activities, videos, a game, and more. The program will be available on Scholastic's site, starting Jan. 31.

"This is something that's more important today than ever," Parks says. "Luciana shows girls where creative thinking, collaboration, STEM, and literacy provide opportunities for growth." Another totally cool thing about Luciana? She shows kids "it's OK to fail," Parks says.

"[We want them] to see failure as an opportunity to learn and persist," she says, adding that Luciana's ups and downs are highlighted throughout her story, including her discovery that she has to be a "pretty good team player here on Earth before she's going to be an excellent astronaut in space."

OK, so I don't know about you, but I'm finding a reason for this doll to be in my house. Even if my daughter isn't quite into her yet, I'm pulling a move à la my brother circa 1999 and buying "her" one. If you need me, I'll be sharing a telescope with my new BFF.