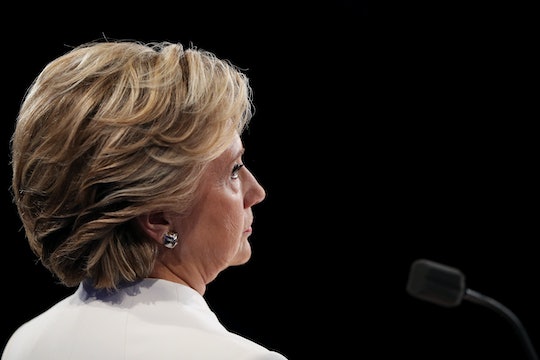 Who Is The Boy From Aleppo? He's Omran Daqneesh, & Hillary Clinton Should Name Him

There were many heated moments between Republican presidential nominee Donald Trump and Democratic presidential nominee Hillary Clinton during the final debate on Wednesday night. But when it came to foreign policy, things got especially tense. In a rebuttal, Clinton brought up "the boy from Aleppo." But for many, her reference came up short, since the "boy" from Aleppo has a name, and it's Omran Daqneesh, and it would be all the more comforting for voters to know that candidates vying for the presidency of the United States could remember it long enough to survive a debate or a press conference.

You have probably seen his picture. In the image, Omran is bloodied and covered in dirt and dust waiting in an ambulance for help. The image gained traction because it's a striking reminder about what war really means. In syria, there are children every day who are injured or killed or separated from their families because of the civil war in Syria.

Luckily, witnesses have reported that Omran and his family were injured in a bombing, but they all survived. Still, there's a sense of quiet and innocence about the image of the child that's chilling. It's hard to not look away or think about what he's thinking or how long he's been waiting in that ambulance. According to CNN, he was injured in a bombing brought about by the Syrian regime and Russia.

The image is striking and the fate of Omran and his family is as worthy of attention as any of the other Syrian refugees fleeing their homes to escape the war. But Clinton should know better than to toss, "the boy from Aleppo" around, like a snapshot of a traumatic moment in his life is akin to "that meme of Hillary shimmying at the debate." He's not a meme. The millions of Syrians fleeing the country for Europe or safer homes aren't political talking points. They're people. They're humans who need whatever help governments and voters decide they can give them.

Clinton is running on the idea that she has foreign policy experience. If she were able to connect that political experience to some sense of empathy for the personal experience of the Syrian refugees, whose fate a president will have a say in, it would just be better, all around. It's possible that in the heat of the moment, under a spotlight, his name just slipped her mind. I mean, even my mom used to mix up my name when she was stressed and yelling at my brother and I to be quiet in the next room. It's possible she just couldn't recall Daqneesh's name quick enough for the two-minutes she had to speak and just went with the best description she could recall. That happens. Still, it stinks. And her flippant way of saying, "that boy from Aleppo" makes it sounds like she doesn't stop and listen to people as much as she claims to. But his name is Omran Daqneesh. We should all do well to remember it.