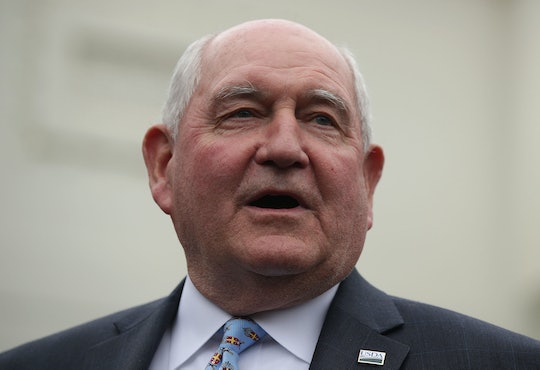 Tuesday night marks President Donald Trump's first official State of the Union address. There are plenty of political pundits out there predicting mayhem, including but certainly not limited to: improper grammar, "alternate facts," and off-the-cuff remarks. But what happens if there's an actual catastrophic event during Trump's State of the Union? Well then, the country is going to need a designated survivor. And for those of you wondering who the designated survivor for the 2018 State of the Union address might be, he's not necessarily someone you'll recognize.

President Trump was free to invite every member of his Cabinet to hear him deliver his first State of the Union address on Tuesday night... well, all except one. Secretary of Agriculture Sonny Perdue is the official designated survivor for the 2018 State of the Union address, which means he has been taken to an undisclosed, secure location outside of Washington, DC while the president speaks at Congress on Tuesday. Perdue is expected to stay at this location, guarded closely by Secret Service agents, until President Trump and the rest of his cabinet members have safely exited the House chambers. Only then will Perdue be released so that he might return home.

So what exactly is a designated survivor? During big political events where the majority of the presidential cabinet is expected to be in attendance (like the State of the Union or the inauguration), there is a justifiable concern for the well-being of the country. What if a catastrophic event happens and the entire cabinet is lost in one fell swoop? Who would be able to run the country at the point?

The appointment of the designated survivor is a tradition that started in the 1960s, right around the height of the Cold War. The United States was suffering from a near-constant state of panic with the dawn of the nuclear age. While the practice of enlisting a designated survivor to ensure the nation would continue in a catastrophic event began in the 1960s, it wasn't until 1984 that there were any official records of the practice. That year, the designated survivor during President Ronald Reagan's State of the Union address was Secretary of Housing and Urban Development Samuel R. Pierce Jr.

It's OK, nothing happened.

If something were to happen during the 2018 State of the Union (knock on wood, of course), what sort of president would the country get with Secretary of Agriculture Sonny Perdue? The former governor of Georgia was the very last pick of Trump's cabinet last year, which makes me root for him. Especially now that he wasn't allowed to attend the State of the Union address because he had to be the designated survivor. Could he be the odd man out? If so, I feel like this would make him a plucky leader for the people.

That being said, it looks like Perdue isn't the very last man in line to succeed the president should something happen. According to the Presidential Succession Act of 1947, he's ninth in line:

As Trump finishes off his speech in front of Congress, I hope Sonny Perdue is somewhere having a good time. I hope he's feeling sort of special and singled out in the best way possible. Maybe the Secret Service will get him some delicious pizza... or something.

But at the end of the day, I hope he just gets to go home and keep on living his life. Another safely delivered designated survivor.