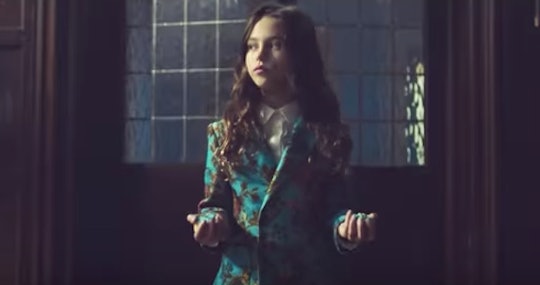 Who Is The Awesome Girl In The Suit In Harry Styles' "Kiwi"?

Former One Directioner Harry Styles released a new video for his song "Kiwi" on Monday, and of course people are hyped. And not just because the theme of the video is amazing and weird and spectacular (I mean, a bunch of kids wearing stylish suits engaging in a cupcake fight? Plus puppies and kittens and such? Yes, please). As fabulous and adorable as all of the kids are, there is one girl in Styles' "Kiwi" video who clearly stole the show. Because she and Styles wore matching suits, and I'm really hoping this is going to be a thing fathers and daughters do now because it's wonderful.

The young girl featured in the video might actually look familiar to moviegoers — Star Wars fans in particular. Her name is Beau Gadsdon, and she played young Jyn Erso in Rogue One: A Star Wars Story. The young British actress shared the role with her younger sister, Dolly Gadsdon, and they were opposite acting heavyweights like Mads Mikkelsen (who played her father, Galen Erso) and Forrest Whittaker (who played her rescuer, Saw Gerrara). Gadsdon only has one other acting credit on her IMBd profile, but it's another hefty one; she played young Princess Margaret on Netflix' The Crown. And now, she's the Queen of cupcake fights in a Harry Styles' video.

In Styles' "Kiwi" video, Gadsdon and Styles wear matching floral blue Gucci suits. The video opens with a disclaimer that "No children or animals were harmed during the filming of this video," but I don't think that was genuinely a concern. The kids, all clad in stylish outfits, don't seem to be bothered to by engaging in an epic food fight. And the puppies Styles introduces into the cafeteria war get to eat up all the stuff on the floor. No harm done.

Gadsdon steals the show, which couldn't have been easy with fancy children and cupcake wars and adorable pets and Harry Styles in the picture. And while it's perfectly possible Styles chose her because of her proven acting chops, some fans have noticed that Gadsdon looks like a little Styles mini-me.

"Kiwi" is the latest song from Styles' self-titled new album, his very first solo album after leaving One Direction. Fans have already been showing their love for the song, with some overzealous fans pelting Styles with multiple kiwi during a recent concert in the United Kingdom, according to The Guardian. Unfortunately, Styles actually slipped on a kiwi a fan had thrown as a way of requesting the song during his performance at the Hammersmith Apollo (where he is enjoying a musical residency) in London, according to NME.

Styles has had one heck of a year in 2017 already; he's been redefining his own career post-One Direction, with his Harry Styles album receiving generous praise from most reviewers, according to Vanity Fair. He also starred in the World War II Christopher Nolan epic Dunkirk, and critics praised him widely for his first acting foray as well, according to USA Today.

As Styles is hopefully enjoying his reviews, some fans think he might be getting another very public review over the next few days. Taylor Swift recently announced the full track list for her album, Reputation, which is set to drop midnight on Friday, and some think the song "New Year's Day" is about her previous high-profile relationship with Styles in 2012, according to Cosmopolitan. The two were reportedly set to fly off to the British Virgin Islands to celebrate New Year's together when the relationship abruptly ended.

Considering Swift's history of dipping into her personal life for some light revenge songs, Styles might want to hold on to those puppies from his "Kiwi" video to use as comfort dogs.